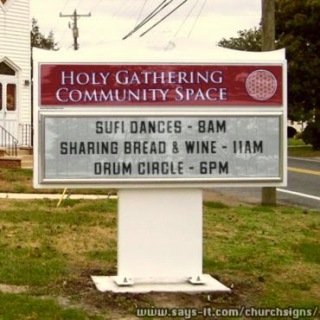 “All gods are one god, and all goddesses are one goddess, and there is one initiator.”
– Dion Fortune, The Sea Priestess

In some streams of modern Neopaganism and New Age teaching this text by Dion Fortune is nearly a credo: that there is but One Divine Source, no matter what the name that we call, what the path that we walk.  This teaching reaches back to ancient mystery religions and Western philosophy.  Socrates was already discussing “god” rather than “gods”. This is not a theological statement about the Deity, but about man: We make up stories about god or gods but we’re all talking about the same thing.

For Neopagans, there is an on-going discussion about “the gods” and reality: are the gods “real” or just projections onto a Nameless Mystery or only Jungian Archetypes that help us understand ourselves? All of these questions play out in other communities, of course.  One Anglican priest, known to me to be a self described Atheist, reports to having rediscovered his inner deity by reading Rodney Bromford’s “Symmetry of God”, a purely psychological discussion of the “god idea” as good for self-healing.  Think also of the “Higher Power” of the 12 Step Programs, where the “Higher Power” can be anything from “a god” to a tree, the Superego. From there you can either say that “thing” is a real thing or not.  The steps between “All gods are one God” and “God is dead” and “There is no god” are all far too short.

While most of these samples fall into the “spiritual but not religious” category, they also feed into the generically secular American religion of moralistic therapeutic deism – the rough ideas about deity and morality that not only teenagers but many adults use as their point of reference. There are 5 important points about MTD,

It’s a pretty fair philosophy, and it jives well with what we’ve been taught about living a polydiverse cultural matrix where we cannot draw real lines without being called “judgmental” or “bigoted”.  It also jives well with anyone who (like me) for too long studied comparative religion.  There are aspects of just about every religion I studied that I rather liked.  Might as well just lump it all together into a philosophy that works well for me. All of which is to say that lack of religious training or too much religious schooling can both result in MTD.  Indeed, religion – generically – is a case where knowing too much can be as bad as knowing too little.

All of which brings me to the title of the post, the Abrahamic Faiths: of course we’re speaking of Judaism, Christianity and Islam, but there are several more, really: Baha’i and Mormonism are both Abrahamic traditions. It is that name that gives them away: Abraham, not claiming literal descent from the Patriarch, but rather spiritual descent, these paths all claim to follow the deity who revealed himself to and entered into covenant with Abraham.

The fly in the ointment is the verb “revealed”.  It is a religious word rather than a scientific or sociological one.  From the outside all you can say is that all Abrahamic Faiths claim to follow the deity followed by Abraham. But that deity had to reveal himself (according to all these traditions) and would not have been known otherwise.  The content of that revelation is the crucial thing and, in fact, the argument stems even from the very moment of revelation: when Abram (as he then was) met three beings on the road, Christians say he met the Holy Trinity, God Himself. Jews say those beings were sent by God, not God himself. Taking the texts as a given, it is from the very beginning that Jews and Christians differ: Christianity teaches it is the Logos, the Word, that created the world – thus icons of Jesus presiding over the naming of the Animals. Jews and Muslims do not say this.  But all three say they say what they say not because of the text, per se, but because of revealed meaning of the text.

The God who reveals himself as Three Persons on the road outside of Abram’s tent cannot be the same God who sent those persons.  The God who reveals himself as a divine Trinity speaking most clearly through himself, incarnate on Earth, Jesus the Carpenter’s Son, cannot be same God who has revealed himself as having no flesh, who has never had any flesh. Nor can he be the same God who needed a new mouthpiece in Mohammed to clear up what the earlier folks got wrong. If you follow the final prophet, those who reject his teaching are sadly mistaken, if not outright heathens. In other words: if you accept the truth claims of one of these revelations, the competing and contrary truth claims of the others can only be either incomplete human delusion or else demonic lies.

We can (and maybe should) argue over which sect in 2nd Temple Jerusalem gave rise to Christianity. We can (and maybe should) argue over which combination of Christian heretics produced the matrix for Mohammed’s teaching (I’m banking on Arianism crossed with a near-gnostic Iconoclasm). But those are scientific discussions, sociological teachings, secular questions.  Only from the outside can you say that all three of these are “worshiping the same god”.  From the inside, all three are packaged in mutually-exclusive revelations.  Buy into one and the other two become wrong to various degrees.  If the Church is the Israel of God, then the Jews must have missed a boat somewhere and Muslims seem to be trying to build their own raft out of flotsam and jetsam.

This is not to say well-meaning members of all Abrahamic traditions cannot live or even pray together in peace, but invocations to the “God of the Prophets” (that fails to mention anyone in particular) or to “God of Abraham, of Jesus and Mohammed” has already broken so many rules of internal logic as to be meaningless humanist idolatry. It is neither fair nor nice to say so, but while we must, in a secular world,  agree to the equal standing of all faiths, if you do not, in the privacy of your heart, believe that yours holds the Truth, why bother? And if you wish to vainly imagine that the “eternal unknowable one” managed only to say “be excellent to each other” in thousands of years of humanity’s search – leaving us to dicker over the particulars – then your deity is only a ditty and don’t you have something better to do?

My final year of College, a student presenting to her class invited us all to “experience the power of music” by chanting “Aum”.  She said it was a syllable without meaning that anyone in any religion or none could chant.  Two of us burst out laughing: myself, and a devout Hindu woman who not only laughed but took great offence.  She backed me up when I refused to sing “Amazing Grace” at graduation: because it was a song everyone knew and it’s meaning was open to everyone.  Couldn’t we just sing the Coke Jingle instead?

Theology and revelation are all an important part of the Abrahamic faiths; their commonalities do not outweigh their differences which are, in most cases, mutually exclusive. In Christianity the faith is dictated by the writer (the Incarnate God) to which must agree or depart.  Mohammed may say he’s talking to the same angel that the Church says spoke with Mary, but the messages seem radically at odds.  You must chose.  If you elect to ignore those differences you are creating yet a new religion, one that denies the incarnation, or the final revelation of God to Mohammed or the only-ever revelation to Moses on Mt Sinai. Yes, I am making equal New Age Syncretism and any conflation of “The Abrahamic Faiths”.  If this seems unfair, I may have not been clear enough.  I know that there are traditions in the world, already, that claim to be Christianity (or another religion), but do already deny those things: their lack of adherence to the revelations they claim is on them as my own sins lie on me.

If you follow the postmodern idea of “well, it’s all a mystery”, that’s ok: but it’s not Christianity, which is a revealed religion, not an a la carte menu. It’s more likely that your spiritual but not religious faith is Moral Therapeutic Deism which, in turn, is pretty close to the officially non-official American secular state religion: In (no one’s particular) God We Trust”. That can be Krishna or Jesus or Freya or Great Spirit or Zeus or even Lucifer. It’s just America’s vague Higher Power dictated by the reader rather than the writer. A friend of mine who is also Anglican asked once if I thought our doctrines shaped God. If I thought so I would not be a Christian: for I want doctrine to shape me. If the doctrines of my faith are not revealed truths about God, why should I care. If yours are not, why should you care? Wouldn’t be easier to just have ice cream? If our revealed faiths are different let us rejoice, and try not ignore them.