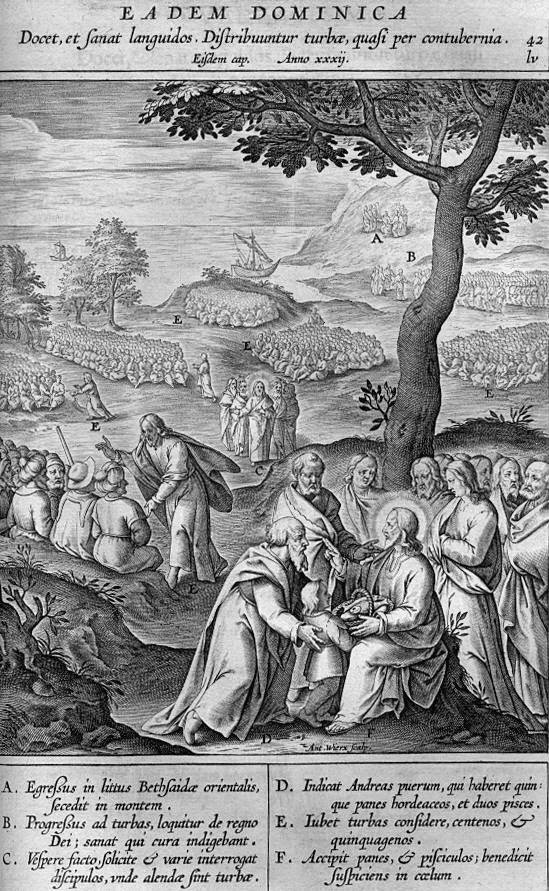 The miracles wrought by our Lord Jesus Christ were verily divine works, and they stir up the mind of man to rise by a perception of what is seen by the eye unto an apprehension of God himself. For God is of such substance as eye cannot see, and the many miracles which he doth work in his continual rule of the whole universe, and in his providential care of everything which he hath made, are by use become so common that scarce anyone permitteth himself to perceive the same, as for example, what wondrous and amazing works of God there be in every grain of seed. Wherefore his mercy hath constrained him to keep some works to be done only at some convenient time, as it were, out of the common course and order of nature, to the intent that men may see them and wonder, not because they be greater, but because they be rarer, than those which they so lightly esteem by reason of their daily occurrence.
For to govern the whole universe is surely a greater miracle than to satisfy five thousand men with five loaves of bread. At the former works no man doth marvel, yet at the feeding of the five thousand, all men do marvel, not because it is a greater miracle than the other, but because it is a rarer one. For who is he that now feedeth the whole world? Is it not the same who, from a little grain that is sown, maketh the fulness of the harvest? God worketh in both cases in one and the same manner. He that of the sowing maketh to come the harvest, is the same that took in his hands the five barley loaves, and of them made bread to feed five thousand men. For the hands of Christ have power to do both the one and the other. He that multiplieth the grains of corn is the same that multiplied the loaves, save only that in this latter case he committed them not unto the earth whereof he is himself the Maker.
Therefore this miracle is done outwardly before us, that our souls inwardly may thereby be quickened. The same is shewn to our eyes to furnish food for thought. Thus by means of those of his works which are seen, we may come to feel awe toward him that cannot be seen. Perchance we may thereby be roused up to believe, and if we attain unto belief, we shall be purified to such good purpose that we shall begin to long to see him. Wherefore, in such wise, through the things which are seen, we may come to know him that cannot be seen. Yet it sufficeth not if we perceive only this one meaning in Christ’s miracles. Rather let us ask of the miracles themselves what they have to tell us concerning Christ ; for in all truth they speak with a tongue of their own, if only we have good will to understand the same. For Christ is the Word of God, and each and every work of the Word speaketh a word unto us.