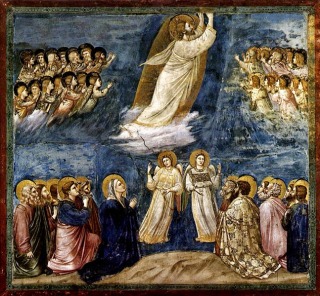 A Homily for the Ascension from the works of Pope St Leo.

After the blessed and glorious resurrection of our Lord Jesus Christ (wherein was raised up in three days that true Temple of God which had been destroyed by the impiety of Jewry), there came by God’s providential ordering a season of forty days, the annual commemoration of which endeth on this day. The original great forty days, dearly beloved, were spent by the Lord in profitable instruction for our benefit. On this wise, his bodily presence was still given to the earth during all these forty days, that our faith in his resurrection might be armed with all needful proofs. For the death of Christ had troubled the hearts of many of his disciples ; their thoughts were sad when they remembered his agony upon the cross, his giving up of the Ghost, and the burial in the grave of his lifeless body : and so a sort of hesitation had begun to weigh on them.

Hence the most blessed Apostles and all the disciples who had been fearful concerning the death on the cross, and doubtful of the trustworthiness of the report of Christ’s resurrection, were so strengthened by the clear demonstration of the truth, that, when they saw the Lord going up into the heights of heaven, they sorrowed not ; nay, they were even filled with great joy. And, in all verity, it was a mighty and unspeakable cause of rejoicing for all the holy multitude of believers, when they perceived that the nature of mankind was thus exalted above all creatures, even the heavenly spirits, so as to pass above the ranks of the Angels, and be raised beyond the heights of the Archangels. For on this wise they perceived that no limit was set upon the uplifting of that nature short of the right hand of the Eternal Father, where it was to be Sharer of his throne, and Partaker of his glory ; and nevertheless it was still nothing more than that nature of man, which the Son hath taken upon him.

Therefore, dearly beloved, let us also rejoice with fitting joy. For the Ascension of Christ is exaltation for us. And whither the glory of the Head of the Church is passed in, thither is the hope of the body of the Church called on to follow. Let us rejoice with exceeding great joy, and give God glad thanks. This day is not only the possession of paradise made sure unto us, but in Christ our Head we are actually entering into the heavenly mansions above. Through the inexpressible grace of Christ we have gained more than ever we lost by the envy of the devil. For those whom our venomous enemy cast down from the happiness of their first estate, those same hath the Son of God made to be of one body with himself, and hath given them a place at the right hand of the Father : with whom he liveth and reigneth, in the unity of the Holy Ghost, ever one God, world without end. Amen. 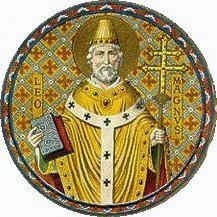 Pope St Leo, Pray for us!