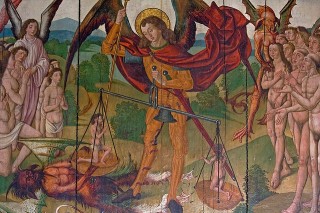 Pop culture of late has become enamoured with indicating disasters via portameaus: Stormageddon. Snowpocalypse. Sharknado. Despite the number of conservatives in my social media, and the number of hipsters – and conservative hipsters – no one has yet come up with a word for the recent Supreme Court marriage decision. I have been waiting with a certain amount of apprehension for the label or hashtag that should be the title of this post.  Perhaps it is a measure of the seriousness of the topic that as yet no one has come up with a slightly tongue-in-cheek parallel to natural or man made disasters. It may rather be that no one has yet fully processed their feelings enough to make fun of the event.

The most common first reaction I heard was one of several variations on an alliterative phrase with two initial Fs as an opening to a vulgar commentary on “the Gay Agenda”.  There were notes posted about a bait-and-switch when discussions of polygamy and polyamory made it into various think-pieces.

To engage this in a theological way we have to dig into the metacontent of our Christians comments: it is exactly the same content as the “No H8” campaign in California. It assumes that anyone who disagrees with me is a “hater”.  It does not allow us to imagine the people on the other side are people of good faith attempting to do exactly what they claim. They are not defending an article of religious faith nor are they creating a safe space where their non-traditional families will be allowed visiting rights at one’s deathbed.  They are “phobes” or “haters” of all that is good and true.  I’ve tried to point out in previous essays that the Christian revelation as regards the proper place of man, woman, and sex and marriage is not self-evident. In fact it is quite the reverse in today’s world. “The Gays” are not, properly, hating on Christianity if they don’t know what it is. Likewise, I wish every defender of traditional marriage would sign up to work on next year’s Gay Pride Parade in their location or to volunteer at the local gay community center: a period of such work would do away with any concept of “the Gay Agenda”.  To believe in such you have to imagine there is a sort of Gay Illuminati that even the local gays and the HRC don’t know about.

As Christians we cannot afford the luxury of enemies. There are, certainly, many people who classify themselves as enemies of the Faith, of the Church, of Christ. There are those who call themselves enemies of more abstract concepts: God, faith, and believers. No matter what they call themselves neither individual Christians “on the street” nor the Church herself can ever afford to see these self-titled enemies as anything other than the one sheep lost in the mountains, the one coin lost in the darkness of the house. As each one of us is a sinner in need of salvation, so are each of them: icons of God may reject him and us but are loved by him all the more. So they must be loved by us all the more. If any one of them are lost at the last day may God have mercy and not require their souls of us for any failure of charity on our part.

For we wrestle not against flesh and blood, but against principalities, against powers, against the rulers of the darkness of this world, against spiritual wickedness in high places. (Ephesians 6:12)

Our enemies, indeed the enemies of all who in good faith seek the Truth, no matter how mistaken they are in their journey, are the common enemies of all God’s creation: the demons. This, too, is revelation.  Almost no one believes in demons (to their own peril) but Orthodox Christianity is quite clear: they are the source of our temptations, and that includes the temptation to anger and hate as much as to lust. Someone may be engaged in sin or its promotion but that does not make them our enemies. Their sins, their promotion of sin are only signs that our enemies – and theirs – have been hard at work. The sinner, himself, is not our enemy, no matter how hard he swears he is so.  Rather than hate – rightly reserved for the demons and my own sins – any sinner, weeping at the Church door, desecrating her from the inside, or shooting at her members deserves my pity, my love, my blessing, and my prayers.

If you are deluded by the demons into attacking the truth and I am deluded by the demons into attacking you, we are both lost: for you have attacked God and I have attacked his living icon. Only the demons win and will laugh at us through eternity. Through prayer and love there is a chance that you, at least, can be saved. No matter how they treat us as the Church of Christ, no human being created in the image of God can ever be my enemy.  Else, I will forget to live the Gospel with them, they will not get the saving knowledge of God in Christ, and I too, am damned.

The “No H8” and “LoveWins” campaign will – probably forever – classify all who disagree as “H8ers”. Our Christian love must make it clear that this classification is a lie. When our faith is classified as hate, let our lives prove the truth of the Gospel. Let us dig deeply into the sacramental grace  of God’s love given us and pray for our enemies, let us love them, let us bless them, let us turn the other cheek. Let us work for the restoration of the icon of Christ in them. Let us also remember that when persecution of any kind falls on the Church it is because of our sins. Let us repent and ask God to take away our hearts of stone and give us hearts of flesh and lives more pure to better bear his love into the world.