Skip to content
I wrote this for the Parish Newsletter. 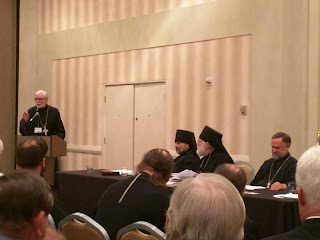 This year’s Assembly of the Diocese of the West, at which I was honored to serve as your lay delegate, was only a brief event: just a couple of hours time before the All American Council rather than the two days of meetings and discussions that would have been normal.  We gathered in a meeting room off the main All American Council room.
His Eminence, our beloved Archbishop Benjamin, spoke of several very important topics in his opening address.  In discussing recent changes in the government’s definition of marriage he said we may need to come to a place where clergy no longer sign a secular marriage license.  This suggestion was greeted with applause.  The Archbishop spoke of many forthcoming clergy retirements in the diocese, for which we seem to be unprepared or unwilling to accept.  He noted,  “It is one thing for a priest to die ‘with his boots on’ but another thing entirely for the parish to die with him.”  His Eminence was pleased to note that there were several parishes around the diocese that were growing, but many felt as if the overall attitude was “would the last one out please be sure and turn out the power”.  He urged us all to read the seven letters to the seven churches at the opening of the St John’s Apocalypse and to see if we found our parish in any of those letters. (These seven letter comprise the 2nd and 3rd chapters of the Revelation of St John.)
His Grace, Bishop Daniel, expressed his thanksgiving to God for his new ministry and for the the support he has received from the clergy and laity of the diocese, and from Archbishop Benjamin.
A Diocesan budget was the only major item presented to the delegates for a vote.  All other items had been sent to the Diocesans Council to relieve time for the All American Council.  The budget’s main change was a move from an “head tax” to a proportional giving that would be shared by all the parishes in the diocese.  Over three years all parishes will be equalized in terms of the percentage they give to the diocese.  This will mirror the national budget: with each diocese giving a percentage of its budget to the Chancery.
After 25 years of discussions, this change passed unanimously.  This irenic mindset was present throughout our discussions as well as at the All American Council, as you will have heard already.
Fr Andreas Blom presented to the assembly about his mission parishes in Ashland, OR, and Redding, CA.  These are a study in contrasts: with the one in the Ashland is growing by leaps and bounds and finding themselves in need of a new building!  They have a young and dynamic congregation, with hearts and minds turned towards God’s mission of Evangelism in the world.  The mission in Redding is rather different: they are faithful, coming to services, but dwindling.
That these very different communities are both until same priest seemed to me to be a sign that to some very great degree it rests on the community to manifest God’s mission in the world although too often we, the laity, like to leave it up to the priest.  His Eminence’s opening address underscored that one of the hallmarks of the OCA was the previously unheard-of decision to give the laity a voice in the governance of the Church. If we do not take up our responsibilities to God’s missions some huge portion of the Church is shirking its duties.
Which one of the seven parishes in  St John’s Apocalypse are we?  We’re not dynamic and growing, but we’re not yet to the point of “last one out turn off the electricity.”  But when I look out from the choir over an empty church on a festival or a vigil, I think we are.  We all have excuses about our life in this great city, but to one of the Churches in the Apocalypse, Christ says, “You are neither hot nor cold.  Because you are lukewarm, I will spew you out of my mouth.”  I don’t want to be lukewarm at all. I thought of our Annual Meeting this year when Raul asked why there was no money for mission or outreach (Evangelism) in our budget. As someone mentioned to me recently at our fellowship meal, “That was like the voice of God speaking to us.”  Why do we not have that outreach? I thought also of the negative reaction of my fellow council members when I wanted to post a sign outside with our service schedule and inviting everyone in to “taste and see that the Lord is good.”  We don’t have a private club.  If we are not reaching out to bring the world to God, we have no business claiming to be God’s church.