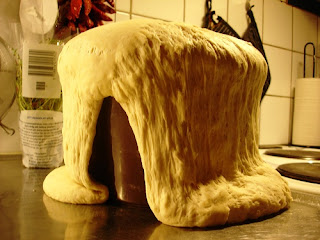 The Kingdom of God is like leaven which a woman took and hid in three measures of flour, till it was all leavened.
Luke 13:21

I heard a preacher once get this horribly wrong. I knew he wasn’t a baker as a result of hearing his take on this. He pointed out that in those days “leaven” wasn’t powdered yeast like we buy in the store. It was a moist goop that you saved for ever because you might not be able to get more – and your family needed bread daily. So you needed leaven daily.  His theory was that this woman had used up all her yeast on these three measures of flour and the point of the parable was how extravagant God is. But any baker knows this is exactly what you do with traditional leaven – what we would call sourdough today: you pour it all in… you stir it up and you let it rise… then you take a pinch of the dough and set it aside as the leaven for tomorrow. (You don’t use just a pinch of the old leaven to start a new loaf because all of the leaven needs to be “fed” as it is call, to keep it burping away. Once the whole loaf is active, then you set aside a cup or so for tomorrow)

A little leaven is all it takes to “leaven the whole lump” as St Paul says in Galatians. Remember Jesus is talking to 12 guys on a dirty road one day, or, maybe, a couple hundred in a field one day and pops off with some version of “We’re going to change everything”. It went from 12 guys to billions and billions of people throughout history. In the first 300 years it took over essentially the known world. In the next 800 years, nearly everything. It went from being something know one ever heard of to being the thing everyone had to respond to – either yes or no.

I’m not here to debate the content of the truth: but rather to note it’s like a little yeast. You’re still free to say no…

But the bread is rising.

Once upon a time there was essentially only one Christian in all of the East – and he had to run away and hide in the Roman west: heretics had taken over and everyone was killing the orthodox Christians. The last one – Maximus the Confessor – by his death, saved the Catholic Faith in the east. All it takes is a little leaven. Ireland was converted entirely without bloodshed by faithful missionaries: a little leaven. St Raphael of Brooklyn travelled the width of the country (by train) several times, teaching the faithful and encouraging them to pray in their homes and keep the traditions. A little leaven.The Russian sea chaplains that visited the Russians in San Francisco and gave them the Sacraments created from their ships and created the Oldest Orthodox Community in the lower 48 – a Little Leaven. Benedict XVI made explicit the existing permission to use the traditional Latin Mass to the entire Catholic church and began a huge outreach that has even affected the Ordinary Form of the Roman Rite with the “Reform of the Reform” – a little leaven. Mother St Teresa, Dorothy Day, Blessed Cardinal Newman. All just a little leaven.

One traditional prayer for the morning asks God to use me to bless each person I come in contact with throughout the day, “whether through the word I speak, the prayer I breath, or the life I live.” We can be leaven in so many ways.

It only takes a little – and the whole lump will rise.

You, what are you doing? It only takes a little.