For so they persecuted the prophets that were before you.
Matthew 5:12b

The Eastern Rite (both Orthodox and Byzantine Catholic) sings this Gospel passage – the Beatitudes – every week at Liturgy (at least in the Slavic traditions). That singing does not include the second part of verse 12. That part of the verse does not show up in any of the assigned readings in the traditional Byzantine lectionary. Likewise, neither the Gospel assigned for this feast of All Saints Day in the older, Extraordinary Form (the Latin Mass) nor the Gospel assigned for today in the Novus Ordo Mass include verse 12b. It would seem it’s never assigned to be read (although someone reading from a Bible, rather than a pre-printed text, might accidentally read to the end of the verse). I can’t find it in any of the traditional lectionaries, so I’m going to talk about it.

Please chew on it first: they persecuted the prophets that were before you. The “they” in that verse is other Jews. Israel enjoyed having prophets around – because, Hey, look! We have real prophets and you don’t! – but they never really liked listening to them. They killed them or drove them into exile. Even when they were around to rescue Israel from some bad folks, the Prophets got themselves killed when they started explaining why the bad folks were there in the first place.

The why was sin, mostly. All of Israel was involved in sin so God let bad stuff happen to them. The prophets said so, the response was “How dare he say that? Kill him!” Jesus basically says, “When things get really sucky, you know you’re doing something right because they did this to other folks whom I also called to speak up in my name.”

I have no doubt that nonbelievers do and will continue to persecute believers, but “so persecuted they” with  “they” meaning other Jews seems to read to me like a prophecy that some, at least, of the coming persecutions will come from people who wear the name of “Christian” at least in the eyes of the world.

There are Church people out there who think that “Christian” means doing what a “good” gov’t says. (That is defined as “agrees with me”.) Christians in England met a lot of persecution from politically-active Church people. The Queen, herself, was a nice Church Girl, of course, but she killed faithful Christians at the drop of a feather, making holy and pious martyrs out of some of the best minds in her country. She even killed one of my ancestors. An icon of the 40 Martyrs of England, slain by that nice Church Girl, is at the head of this post. (There is an excellent fictionalized account of this period written by another convert to Catholic Church, Robert Hugh Benson, called Come Rack, Come Rope.)

There are people out there who think Christianity is about being nice and giving social services, not about getting saved and certainly not about contravening prevailing misunderstandings of humanity or sexuality. These are not Christians, properly understood, but they are Church people. They are quite happy to ditch the rest of us if they can have their pretty music and their nice buildings. One Anti-Christian Church Girl spent a lot of her denomination’s money filing lawsuits against Christians. It came as quite a shock to Christians how willing she was to punish them. They never read 12b, I think.

Countries behind the Iron Curtain gave us millions of martyrs in the last century (Orate Pro Nobis!) but they, as it were, saw it coming.  We’re blind to the fact that we’re surrounded by people who want to use the “How to Boil a Toad” method of killing the Church. Some of them are just being anti-Christian, but a good few are sitting in the church down the road preaching a different gospel. They just imagine they have it right, finally, after 2000 years of error. The rest of us need “reeducation”. They don’t know that trying to kill the Church is how you make it grow, but that doesn’t do us much good in the short term. Boiling is still boiling. We’re not in a place to fight back: turning the other cheek and all that. We may be called to be the blood of martyrs watering the seed of the Church. But if we’ve never read 12b it’s a surprise. I afraid we’ll all chicken out. Some folks seem to think one candidate for president will be worse, in this regard, than the other. But I think not, I think both could be rather nightmarish to their “not-supporters”. Both, it is to be noted, are Nice Church People.

We may (or may not) be about to enter a new growth spurt, if you will. Do everything else in the Gospel, but read 12b. Make wise choices and don’t be surprised.

Holy Martyrs of England and Wales, pray to God for us! 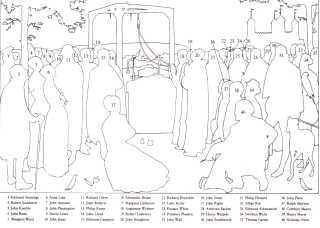 Source for the painting at the top and this key:
The Jesuit Institute