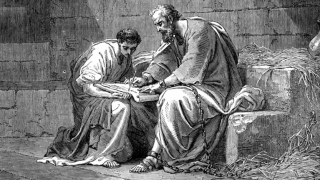 I, Paul, write this in my own hand: I will pay. May I not tell you that you owe me your very self. Yes, brother, may I profit from you in the Lord. Refresh my heart in Christ.
Philemon 1:19-20

The Epistle to Philemon is one of those passages from St Paul that annoy people. See: it’s about this slave. Evidently the slave was abused in some way by his master (the Philemon in the title). The slave ran away to St Paul and, after some time together in prison, St Paul sent him back to his master with this letter. One doubts if the slave, himself, could read, but this letter was intended to serve as a hall-pass, if you will, or a doctor’s note. Yes, your slave has been with me. Please excuse his absence.

People read this today (or 150 years ago) and wonder that Paul didn’t keep the slave with him and or send him on his way. Why bother to send him back to his master? 150 years ago, white Americans read this Epistle and demanded the right to keep (and abuse) their African slaves, claiming it and other passages said such was ok. They miss the point, though. But it is clear we all impose our historical points of view on St Paul, St Onesimus, and St Philemon.

We picture, essentially, some 1st Century Greek version of Uncle Tom’s Cabin, although we have no reason to imagine that all the parties here were anything other than Mediterranean and white.  In fact, St Onesimus could have been a Gaul, or a mixed race child of slaves. He could have been a street urchin who was rescued and raise up in the house, or sold to the house to pay off a debt… any number of things.  But it’s most likely that everyone involved is white. It’s probable that St Philemon is wealthy – wealthy enough not to miss a slave for an extended period of time, allowing St Paul to blithely suggest the slave’s time with him was a generous gift.

Almost everything beyond that is an anachronistic projection of our historical location.

To preach destroying a transcultural institution that was widely accepted would have put the Church, herself, at risk. Then the very organ for winning the salvation of these two saints and the freedom of all concerned would be lost in the name of political upheaval. But to use that institution as the organ for salvation… this was Paul’s genius in the Spirit. He did this to the institution of Roman marriage as well – taking something deeply woven into the local culture and saying “let’s not cause a mere scandal, let’s use it to save the world.”

We walk through a world where we would, I think, rather focus on causing a scandal, a massive upheaval. We want to score points, win debates and get all the clicks. But when we cause scandal, we destroy the Gospel – itself the real scandal. It is so without our help.  The Gospel is the Mercy of God: we do not think of this today when we are so very focused on Justice. We don’t want the Justice of God, honestly, we don’t. Nor do we want to live that Divine Justice. Sure, many deserve that fate, lighting, boom. But how can you save them after you’ve killed them? God reserves that to himself: and he has not yet seen fit to use it. God gives us the tools of love, and mercy. God gives St Paul an ironic, humorous guilt trip to use on Philemon. God needs Paul to show mercy to Onesimus and Philemon. God’s mercy must flow from Philemon to his slave. But Onesimus must also be merciful here. That’s everyone’s struggle: we all want to be in the right and be gracious. But we are all sinners together. God says, “love your enemies”. That is the scandal.