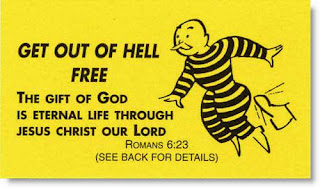 Jesus asked him, “What do you want me to do for you?” He replied, “Lord, please let me see.” Jesus told him, “Have sight; your faith has saved you.” He immediately received his sight and followed him, giving glory to God.
Luke 18:40c-43a

This blind man, asking for pity. Jesus says, “What?” The man (called Bartimaeus by St Mark) says, “Let me see.” Done. Jesus said, “Your faith has saved you.” At no place was the man asking for to be saved. We know the Greek word here, σῴζω – sozo, can mean “made whole” or “healed”, it gets rendered “saved” so many times it’s worth talking about.

What does it mean to be Saved? What is it when one is sozoed?

Unfortunately, for all most all Americans, Christian or not, to be saved means “going to heaven.” There is no scriptural reason to hold that meaning. None. At all. Period. Nothing in the Bible makes any sense at all if that’s what sozo means. It is pointless and imaginary. It’s nearly demonic. It is NOT WHAT THE BIBLE SAYS (for you Sola-protestants out there). Nor is it what the Church says. It is not what Protestant Christians of even 200 years ago would have meant by the word.

If you died today, asks this demonic temptation, do you know where you’d spend eternity?

I can answer that question in two words – equally true for me, for you, for Ivan the Terrible, for Adolf Hitler, for Mother Theresa, and for your great grandma Mae. The answer is totally the same for everyone:

We will all spend Eternity with God. Eternity is that omega point where our human, fear-based self-shielding mechanisms of time, space, sin, self-interest, ignorance, and doubt all collapse into the event horizon of God’s very beingness, from whom nothing can escape, by whom all things are known, and in whom all things live and move and have their fullest being. There is no place else to go, nowhere to run in eternity where God is not. There is no place to run here in Space-Time, either, if you really want to know. It is our delusions that allow us to think that we’re safe from him. We can ignore him for a few minutes, hiding behind fig leaves, as he walks in the evening crying out, “Earthling, where are you?”

Eternity with God is not “salvation” though, except in the abstract: certainly Jesus didn’t send Bartimaeus there when he said “you’ve been σῴζωed – sozoed.” Nor did he send anyone else to “the Gold Streets of Glory, halleluia!” when he said to the woman at his feet, the lepers, the bleeding woman, the Syrophoenician woman, the Centurion, “Your faith has sozoed you.” Neither is it what St Paul and the other Apostles mean when they say, preaching, “You and your whole household can be sozoed this night…”

In the LXX, the Greek translation of the Hebrew Bible, σῴζω – sozo is used for the word הושִׁיעַ, hoshia which is related to Jesus’ own name, Yeshua. There is our clue, really: think of it that way for just a moment and it will make sense:

No one will be excluded from God’s presence – but to see God is to be be plunged into what? “Our God is a Consuming Fire.” The only Human who can be there is Jesus, who is God, himself. To be saved… to be brought into communion-via-likeness with Jesus… is to stand alive in the Fountain of Life itself, to be made like the Burning Bush: raised to a fullness of Beauty unimagined, burning and yet not consumed.

Dante takes us so close to heaven:

This heaven has no other where than this:
the mind of God, in which are kindled both
the love that turns it and the force it rains.

As in a circle, light and love enclose it,
as it surrounds the rest and that enclosing,
only He who encloses understands.
…
Like sudden lightning scattering the spirits
of sight so that the eye is then too weak
to act on other things it would perceive,

such was the living light encircling me,
leaving me so enveloped by its veil
of radiance that I could see no thing.

As he is ending his glorious quest Dante links heaven with us here, on earth: we are being made ready, turned…

The Love that calms this heaven always welcomes
into Itself with such a salutation,
to make the candle ready for its flame
…
But already my desire and my will
were being turned like a wheel, all at one speed,
by the Love which moves the sun and the other stars.

Oh, my friends, I have no doubt that God will call all men to himself – he is doing so now. Not everyone will want to be there. We have to be saved – to be made as much like Jesus as possible. We are working out our salvation here, now – working out our transformation into Jesus. When the opening of our presence to God’s Being is at the fullest, some of us will have been prepared and some will fight it off. In that Divine Light our only defence will be to self-destruct as we burn. Or we can live there forever – only if we, even now, are being turned like a wheel, being brought up to speed, by the Love which moved the Sun and other stars.