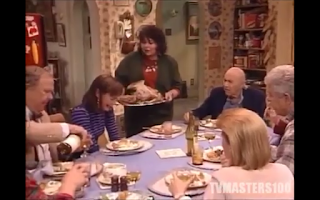 Has none but this foreigner returned to give thanks to God?
Luke 17:18

The NABRE renders this as “give thanks to God” but the Greek, the Latin, and just about every other translation says “give glory to God” or “give praise”. I think it could easily be “give worship to God”.

Jesus sent the 10 guys he had healed off to the temple, as was their duty. But this guy came back. So: I think it’s interesting that the comment is not “9 guys went to the temple to give glory to God, but this guy came back to say thanks.” Rather, what Jesus says is, “9 guys did what was culturally expected, but this guy, prostrate at my feet, is giving glory to God.” The temple is pretty awesome, but something greater than the temple is here: God himself.

The place where Jesus, God incarnate, is is the place to render thanks.

There’s something else. The disease of leprosy makes one an outcast. All the outcasts are together in a colony. They don’t really care where you were before or what you were “in the world”. They live together and die away from the world. When these ten were cleansed, something happened: the 9 that walked away were Jews, they realized their 10th party was a Samaritan. Now that they were all clean, they had nothing in common, nor would they dare be seen with each other. So recently outcasts together, suddenly the Samaritan was, alone, himself the outcast.

The place where Jesus, God incarnate, is is the place outcasts come home.

We are, all, outcasts in the theological sense. Certainly we hope to hear from Jesus, fides tua te salvum fecit. “Your faith has made you whole – has ‘saved’ you”. The only way to be “whole”, to be “Saved” is, for us, to cast off all the desires of culture and, falling at Jesus’ feet, to come home, to be restored to communion with God.

I saw a posting on twitter recently, the writer urging us all not to post pictures of our Thanksgiving Day because – literally – everyone will be doing the same thing. So much so, that for very little money, it’s possible to order a “Thanksgiving Feast” at many stores. The cost may vary, but the menu will not: we’re all eating the same stuff today, minor variations here and there, but without much change all the usual stuff will be on every plate today. Even homeless people, finding themselves in shelters and such today will have the same menu as almost the entire rest of the nation.

Who are “our” outcasts: we might be able to point at a few sorts and conditions of people who, nationwide, would fit the bill. But, mindful of Jews and Samaritans, let me ask more directly – who are your outcasts? Who is not welcomed at your table today? If they are outcasts then so are you… for you cannot offer your gift at the altar until you reconcile with your brother. What are you going to do about it?

In the Eastern Liturgical tradition, the evening before Lent begins, many parishes and monasteries practice the Rite of Mutual Forgiveness during which members of the Church prostrate themselves before each other asking forgiveness. It may take a long while, depending on how many folks are there, but sometime serious wounds begin healing on that night.

There is no such rite at the beginning of Advent, the season preceding Christmas, but there should be! We in America, at least, have a chance today: when people come to our house, when people won’t come… I think we may each have people to forgive: people who voted “wrong”, people who “explained” too many things on their talking points list last year (#Libsplaining). I’m sure the list goes on.

What would it be like to welcome home the outcasts and beg mutual forgiveness before offering your thanksgiving at the altar of your family table?