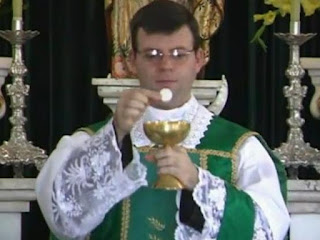 In RSVA, Douay, or NABRE with other Mass texts.

“Lord, I am not worthy to have you come under my roof; but only say the word…”
Matthew 8:8

In Advent, we are waiting for the coming of Christ, who comes to us, if we will but receive him, every day in the holy Eucharist.

These words, “Lord I am not worthy…”, are said at every western liturgy prior to communion, as the priest holds up the consecrated Bread and Wine, now the Body and Blood of Christ. The Celebrant says, “Behold the Lamb of God. Behold him who takes away the sins of the world. (The new Mass adds, “Blessed are those who are called to the supper of the Lamb.”) To which the people reply, “Lord, I am not worthy that thou shouldest come under my roof, but speak the word only and my soul shall be healed.” The translations vary. The Latin in all cases is “Domine, non sum dignus ut intres sub tectum meum: sed tantum dic verbo…” In the new Mass it is said only once. In the older rites, in either Latin or English, it is said three time.

Lord, I am not worthy that you should enter under my roof, but only say the word and my soul shall be healed.

If one believes the Holy Communion to be what the Lord, himself, said it is, “my body” and “my blood”, then no one is worthy at all, save by the grace of God, not of ourselves lest anyone should boast. It is not false humility that lays this prayer out there before Communion. In the Byzantine rites, both Orthodox and Catholic, the pre-communion prayers are much in the same mode. The Anglicans (and some WRO) say, in another prayer, “…we are not worthy so much as to gather up the crumbs under thy table…”

To modernist ears, this sounds patently foolish. Theologically they might say something like “God loves us so we’re not going to crawl to him like that.” The non-theological might say, “This is why I’m not religious: I refuse to abase myself like that.” These two approaches are essentially the same, one tries only to sound more friendly to the older traditions. Both are essentially humanist rather than theist: man as the measure of all things, rather than God as such. In the latter case, no one can measure up to God, in the former case, God had better measure up to us or get out of our way.

It is sad to see what these two sides of the same coin can do to any religion – not just Christianity. If some part of Buddhism or Christianity, of Judaism or Hinduism, or Islam or any other path make a humanist feel “uncomfortable” it gets ignored. The language used may be something like “I sat in dialog with this text…” or “cultural contexts change” or a more blatant, “This is meaningless to us now.” Yet in all cases, from sex, to life and death, from communion to creedal statements, for the simple reason that I know better now, it gets tossed out. “Not in my church,” we say – in all humility of course before “Teh Unoabulz, amirite? Whoa!”

How has our culture taught us to be so arrogant? How have we forgotten to be humble? The Centurion, a man who has every right to be arrogant in his culture: a lifer in the Army, as we would say nowadays, wealthy enough to have servants, to have a house in this arid Judean waste where Caesar has seen fit to send him; the Centurion is humble before Christ. He is humble before this man whom he may see as a miracle worker or even a teacher: but he also sees, certainly, as one of these rural hicks we have enslaved. He’s here to dominate these people on behalf of his Emperor, and yet he says, “Lord, I am not worthy…” A “coastal elite” being humble before a Trump voter.

Even the Centurion’s claim might sound preposterous to us. “I am a man under authority, with soldiers under me.” Of whom in our life would we say that? Certainly not our employers, nor our employees. Certainly not of our spiritual elders or those for whom we are responsible. God knows, it’s not our secular authorities… no… we all stand on equal footing and, if someone says, “do” or “do not”, I concede the action of my own free choice… or so we tell ourselves so as to keep our illusions of inflated worth alive.

And yet… and yet… that person there, that Elder, that Employer, that Customer, that (expletive) in the DMV line or behind the DMV counter… is a living icon of God. Whom we claim to receive after this waiting time of Advent, in tears and awe. In in the bread with our curt little nod and “Domine non sum dignus…” But in emotional mushiness before the image of the Nativity. And in rudeness at Wal*Mart.

How can we see him in our arrogance?

The only path that has created equality is our mutual humility before the Terrible Judge, who has condescended to love us. If we take him functionally out of the picture (even if we leave him in by name) then all pigs are equal, but some are more equal than others. I’m grabbing my TV at Wal*Mart, stomp anyone in the way.

Blessed, praised, hallowed, and adored be Jesus Christ on his throne of glory in Heaven, in the Most Holy Sacrament of the Altar, and in the hearts of his faithful people everywhere.

Lord, I am not worthy.