Et sicut qui thesaurizat, ita et qui honorificat matrem suam. Qui honorat patrem suum jucundabitur in filiis.
And he that honoureth his mother is as one that layeth up a treasure. He that honoureth his father shall have joy in his own children.
Sirach 3:5-6

Today’s feast is not part of the Byzantine Tradition and, in fact, some Traditionalists in the Orthodox Anglosphere decry it as heretical – even rejecting images such as we have above. However, here is the “heretical” image of the Holy Family from the Orthodox Church in Bethlehem.  This heretical image hangs over the spot of where the Christ child was in a manger laid. The faithful daily kiss the ground underneath this image. 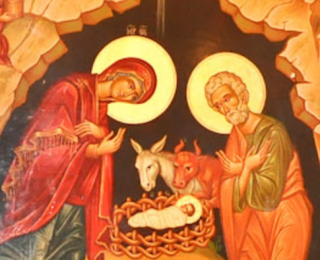 After the “red martyrdom” (in blood) of St Stephen and the Holy Innocents, thenthe “White Martyrdom (in monastic patience) of St John, we have the “Green Martyrdom” of St Thomas Becket yesterday and, today, of the Blessed Virgin and St Joseph, her Most Chaste Spouse.

It may seem odd to speak of the BVM and St Joseph as Martyrs so allow me to explain: they did not have to do anything other than be who they were. Mary and Joseph were called to raise up God in the ways of piety and holiness, and to support him. They were chosen in God’s wisdom, but their chosenness was specific. God did not pick the next door neighbors, Tom and Helen. Nor did he pick the ones on the other side, Mike and Carol. Either couple would have made a good family. But neither were the family God wanted. 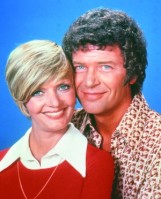 And then Jesus was born. Mary and Joseph gave up normal lives to be the Mother and Foster Father of God. This is why I speak of them as prototypical green martyrs. Their very selves were needed: Mary as a young virgin, Joseph as a wealthy widower and carpenter. Those exact roles were needed to give birth and to raise up the God-Child to be be whom he was supposed to be. In living out their lives exactly as they were, in God’s service, they are green martyrs.

If you don’t believe in Divine Revelation, or, if you believe in a Mute God, none of this matters. However the Church teaches a divine authority exists. God is not imprisoned by human choices, nor can he be. If you say “God had to be born into such a family” then you are denying the power of God to chose. If you say, “God did that in such a way because that was the culture of the time, it would be different now”, then you don’t believe in an omnipotent deity who can say what is good and what is not.

The Holy Mystery of the Incarnation is exactly that – a Mystery. But it is one revealed to the Church. And she holds up, therefrom, a sort of family that is God’s plan. If you say it was a cultural limitation in which God was trapped, then you have a different understanding of God than I do.

In short: Mom, Dad, and the Kids.  That’s the family as God understands it.

Now, we are all sinners and we all fall short. Some of us have broken families. Some of us have odd families that are disordered either by drugs or adultery, sexual sins or fighting, politics or other failures. We may have families constructed by the sins of generations before us, or by the failures of last week. None of us – unless we are this family whom we celebrate today – have a perfect family. But we do have a model to look to, a place to aim for. As Jesus is our model for humanity, St Joseph is our model for manhood, and Mary for womanhood. This is our model for the family.

There is a prayer I say everyday to St Joseph. I used to say it in my unemployment and now I say it as I get ready for work:

Glorious St. Joseph, model of all those who are devoted to labour, obtain for me the grace to work conscientiously, putting the call of duty above my many sins; to work with thankfulness and joy considering it an honour to employ and develop, by means of labour, the gifts received from God; to work with order, peace, prudence and patience, never surrendering to weariness or difficulties; to work, above all, with purity of intention, and with detachment from self, having always death before my eyes and the account which I must render of time lost, of talents wasted, of good omitted, of vain complacency in success so fatal to the work of God. All for Jesus, all through Mary, all after thy example, O Patriarch Joseph. Such shall be my motto in life and death.

When we pray that God will give us a heart like his, on fire with love for the world, do we not know that the best place to learn this – since we are not God – is from the hearts of Joseph and Mary?