In the Douay, the RSV, or the NABRE with other Mass texts.

The Lord is my light and my deliverance; whom have I to fear? The Lord watches over my life; whom shall I hold in dread?
Psalm 27:1

On their awesome, live album, How the West was One, (Myrrh, 1977) the 2nd Chapter of Acts Annie Herring shares her story of being afraid, as a young child, of monsters under her bed at night. And she was terrified that if even one tiny bit of finger leaned off the bed, the monster would eat it. She was sure that when she grew up it would go away… thing is, fears don’t just go away. They come from outside of us. This story always struck me, because even in my 30s I was afraid of very stupid things – the dark, walking alone in a strange place, certain neighborhoods. I’ve learned there are really two ways to deal with these fears: one involves turning them over to Jesus – and then walking through the fears. The other involves surrounding yourself with friends – and then walking through the fears. I’ve learned the fears never go away until you walk through them. It’s best if the friends are Christian friends…

About 3 years ago? 4? Anway… I went on a coffee date. We stopped on the corner of Market and 5th because I had an errand to run: taking delivery of my first set of bifocals! While we were inside “Site for Sore Eyes” an event happened. The annual West Coast March for Life went down the street. They tend to be a quiet lot: a lot of praying, some singing. The louder noise comes from the sidelines. My companion turned to me and said, “There go the best candidates for genocide.” So, ending the date a bit early, I crossed someone off my list. And forgot about the annual West Coast Walk for Life.

But his words keep ringing in my ears: there go the best candidates for genocide. Why would any sane human say such things: and him a peaceful sort, and an artist, and, by chance, a Jewish person rather proud of his Jewishness. They know the meaning of genocide. How did pro-lifers become candidates for, let’s call it, die Endlösung?

Equally annoying now, today, is the assumption (found on left or right) that anyone who is pro-life must support the current president. That may be if, by pro-life, you mean only “pro-foetus”. Pro-life addresses so much more: peace, the death penalty, healthcare, feeding the hungry, clothing the naked, housing those who seek shelter, just wages, just work, just social policies, support for adoption, support of proper education, support for immigrants and refugees. This is pro-life in the Catholic (which means “whole”) sense: celebrating and rescuing the divine dignity present in each human life. But Pro-lifers are not allowed to play in all those other Reindeer Games because we are also opposed to denying the blessings of life to the unborn.

I’m over 50 now, I’m allowed to have opinions on things and trust my friends to be adult about it. But there are still monsters under the bed. I’ve heard stories, recently, about how reactive San Franciscans had become, yet it’s not just San Franciscans, it’s pretty much everyone in America: left and right, they want to beat the crap out of people that disagree, or fire them, or run them out of town on the rails. Everyone is human. Everyone. Humans are primates – and all primates are territorial. Watching the left get really excited about a man getting sucker punched on the internet yesterday nearly made me go register for the GOP, but I know the right would get really excited about the same thing if the victim was, say, the president of Planned Parenthood. That’s where we are in this country: I’m 100% Correct and you’re worth beating up.

So this seemed like the year some nut might try to make a few martyrs.  And I wanted to be there by way of atonement and reparation, if nothing else. As it turns out all I did was keep a man carrying a banner from tripping in a small pothole. I did, however, walk the full length of the route with the Dominicans of the Western Province, and pray the rosary. That was awesome! Prayer is communion: in the quiet places on Market, the parts of the financial district where there are no people on the weekends, there was this gentle rumble, “Holy Mary, Mother of God, pray for us sinners now and at the hour of our death. Amen.” At the end of each decade, the refrain from the Lourdes Hymn was sung. “Ave, Ave, Ave, Maria!” And it felt like I’d known that song forever… which I have, really: that’s the Song of Bernadette.

Yet more importantly I wanted to walk: to not be afraid to have an unpopular opinion. I wanted to put into play something that I believe deeply, that humanness starts at conception and never ends. That all of life, from conception to natural death and beyond, is the synergistic dance of the soul and God, and it’s not our place to stop, to drop out of, or to take someone else out of that dance. I’m living, experiential proof that silence is consent – by the number of folks who just assume I agree with them and never asked. But then I never offered. I wanted to walk because, increasingly, it felt like not walking was denying my faith. How can the light shine in the Galilee of the Gentiles if we, who say we follow Jesus, keep hiding out?

It was fear that kept me from saying so: Fear that keeps me, even now, worried about consequences of posting things like this. I may have walked right by my office singing the Lourdes hymn (albeit on a weekend) but this is on the internet. My one time being internet famous in this century was enough for me. Fear, though (I can talk about pride later) is my big bugaboo. Annie says God will help me with my fear, but as I noted, you still have to walk through your fears to face them. So I did. 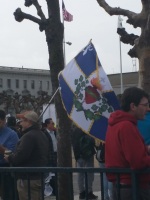 It should start with “He is my light”.