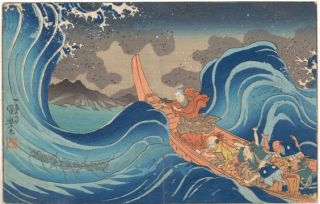 In the Douay, the RSV, or the NABRE with other Mass Texts.

And he said to them: Why are you fearful? have you not faith yet? And they feared exceedingly: and they said one to another: Who is this (thinkest thou) that both wind and sea obey him?
Mark 4:40

Why are we fearful? Because these waves are higher than we are. Because the hellish winds are blowing. Because the Orange Man is scaring us. The Blue Bogie Lady is under the bed! The Evil Russians! The murderous Mohammedans! The gorgeous Gays! The pulchritudinous pink hat people… Damn, but we’re a scared lot of fools ain’t we?

Here’s a story about my step-grandmother who lives in a very good part of town, surrounded by people in large houses and huge lawns. The last times I slept in her house (before and right after my Grandfather’s death in 2002) I slept in the livingroom on the sofa and every time I came back in from smoking, as I did then, she asked me to make sure the door was locked. Because, she insisted, even in the daylight someone might come up and try the handle of the door and, were it unlocked, there is no telling what sort of havoc they might wreak. She insisted that she had heard the nob turn, softly and stealthily, from time to time, as someone unseen in the dark…

Fear. “Deilos” is the greek word here. It’s not the same as the the second use of fear in this verse where the word is “Phobos”. One means timidity – Strong’s Greek says it means “lacking moral gumption”. Give me that… Gumption. Awesome! Phobos, too, has a bad meaning, though has a good meaning as well: it’s “fear of the Lord” which the Apostles show in the latter half of the verse. They stop being timid in the face of some rain and they grow some brass gumption; and then they show fear of the Lord.

Faith is not a recitation of doctrine. You cannot get faith by reciting the creed. Faith is the Essence of things Hoped for the substance of things unseen. It is the very reality our doctrine describes. So: which part of the Church’s teaching don’t you accept when you get all twisted with fear? If you believe that God has your life in your hands, if you believe that God is watching out for every hair on your head, every bird on the limb, every beat of the heart of the universe then… why are you fearful?

Fear makes for mountains of suckiness: why did Christians help Hitler? Because they were afraid he would beat them up if they didn’t. So they helped him, and he stole their faith anyway and sent them to the camps. Why would it ever be otherwise?

Elsewhere the Bible says “perfect love casts out all fear” because the opposite of fear is not bravery, it is love. The opposite of love is not hate: it is fear. The barrier between these two – fear and love – is Courage, from the Latin “cor” meaning the heart. The opposite of courage is timidity, the lack of gumption. And I will suggest that – in the world where winds buffet the Barque of Peter, we must live our faith in love which will seem courageous in the eyes of the world – and even foolhardy.

Untimidly leaving our doors unlocked means we will let in terrorists for fear – phobos – of locking out Christ himself.

Leaving our wallets unlocked means we will give to drug addicts for fear of not giving to Christ himself.

Leaving our hearts unlocked means we might get hurt or taken advantage of for fear of not letting in Christ himself.

Listen: I know the boat is leaky. I know the winds are strong. I know the water splashes in from above even more than below. It feels to me too as if each successive wave will kill us. It seems as if even my own fellow passengers are helping the vessel to capsize.

Have you not faith yet? (Today’s song comes in two flavors…)