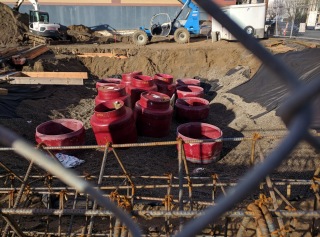 Dear Readers –
Three important things!
First: the name has changed.  I’ve been Doxos since 1998. I’m done now. In fact, the domain is up for sale (not the server space, just the name).  It’s going to be up for auction. I’ll keep you posted. In the mean while if you want a five letter domain and want to help me buy a bar in Ireland, let me know.
Secondly: the name has changed. Pilgrim’s Egress seems a humorous pun and aptly describes my life. As I wrote on Facebook, I’m as stable as a peripatetic Franciscan. I’ve decided to embrace it. I’m not changing the URL though as that would break all the comments. So we’re stuck with “huwraphael.blogspot” etc.
Thirdly:  the content will continue with a change after a minor delay. The post-Trent missal that is used by the Antiochian Western Rite communities, as well as the pre-Trent one that is used by the ROCOR communities, has an awesome thing in it. The daily office and the mass tie together via the lessons, especially in Lent. In Lent the same Gospel is read at Matins and at Mass. This comes, as well, with a Patristic Homily on the Gospel. This was always a cool thing to me, making the daily office very tight. But it is missing from the Novus Ordo because of the multiplication of readings. Ok, more Bible, good, but less patristics bad. So I’ve decided to try, at least, and produce a daily patristic lesson for the Gospel in Lent.  This will start on Ash Wednesday. My own ruminations may or may not continue through Lent, but will resume later. I don’t expect any new posts between now and Ash Wednesday (1 March), but one never knows, do one?
Oh, one more: just because I keep getting asked it – even though I thought I was very transparent, but I guess not, mea culpa – I am attending classes at the Roman Catholic Church of St Dominic’s here in SF. If God wills, I will be received into the Roman Church on Easter this year. Pilgrim’s Egress make more sense, right?
Much love,
Huw