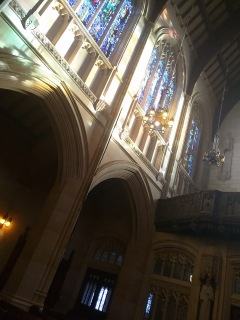 A Patristic Homily for the Friday after Ash Wednesday.

From the Catena Aurea of St Thomas Aquinas, and the words of Sts John Chrysostom, Jerome, Rabanus, Augustine, Hillary.

Then came to him the disciples of John, saying, Why do we and the Pharisees fast often, but thy disciples fast not?”

This is arrogance – to take pride in one’s piety; to boast, as it were, in one’s humility, if such were possible. Nor can we excuse John’s disciples for they sided with the Pharisees whom they knew had been condemned by John. Still here they are, bringing a false accusation against Jesus, whom they knew their master had preached. What they say is only this, Since you are the Physician of souls, why do your disciples neglect fasting and eat with sinners? And to augment the weight of their charge by comparison, they put themselves first, and then the Pharisees. They fasted as they learnt out of the Law, as the Pharisee spoke, “I fast twice in the week;” the others learnt it of John.

John drank neither wine, nor strong drink, increasing his merit by abstinence, because he had no power over nature. But Jesus has power to forgive sins. Why should He avoid eating with sinners? He has power to make them righteous – which none others have. Certainly Christ fasts – for he follows the law and you should not avoid the command; but He eats with sinners that you may know His grace and power.

Observe how when strangers, as before the Publicans, were to be defended, He accuses heavily those that blamed them; but when these same outsiders brought a charge against His own disciples, He makes answer with mildness. “And Jesus saith unto them, Can the children of the bridegroom mourn as long as the bridegroom is with them?” Before He had styled Himself Physician, now Bridegroom, calling to mind the words of John which he had said,  “He that hath the bride is the bridegroom.”  Christ is the Bridegroom and the Church the Bride. Of this spiritual union the Apostles were born; they cannot mourn so long as they see the Bridegroom in the chamber with the Bride. But when the nuptials are past, and the time of passion and resurrection is come, then shall the children of the Bridegroom fast.

Everyone who rightly fasts, either humbles his soul in the groaning of prayer, and bodily chastisement, or suspends the motion of carnal desire by the joys of spiritual meditation. And the Lord here makes answer respecting both kinds of fasting; concerning the first, which is in humiliation of soul, He says, “The children of the bridegroom cannot mourn.”  Then we must mourn because the Bridegroom is taken away from us. And we rightly mourn if we burn with desire of Him. Blessed they to whom it was granted before His passion to have Him present with them, to enquire of Him what they would, to hear what they ought to hear. Those days the fathers before His coming sought to see, and saw them not, because they were placed in another dispensation, one in which He was proclaimed as coming, not one in which He was heard as present. For in us was fulfilled that He speaks of, “The days shall come when ye shall desire to see one of these days, and shall not be able.” Who then will not mourn this? Who will not say, “My tears have been my meat day and night, while they daily say unto me, Where is now thy God?” With reason then did the Apostle seek “to die and to be with Christ.”

Figuratively, this His answer, that while the Bridegroom was present with them, His disciples needed not to fast, teaches us the joy of His presence, and the sacrament of the holy food, which none shall lack, while He is present, that is, while one keeps Christ in the eye of the mind. He says, they shall fast when He is taken away from them, because all who do not believe that Christ is risen, shall not have the food of life. For in the faith of the resurrection the sacrament of the heavenly bread is received.