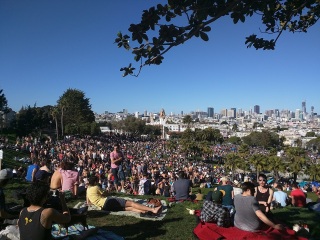 This verse can be thrown in our faces at times. Anytime a comment about morality is made it can turn into a “Don’t judge me, bro” sort of conversation. Yet the Greek word rendered “Judge” can mean more like dividing the grain from the chaff. In fact, Jesus – who often made moral statements regarding sex, anger, finance, etc, – told several parables in keeping with this idea of division. We’re not to cut off people except as a very last resort. That avoidance of division would include making moral judgements about persons, certainly, but it doesn’t mean not making moral judgements at all.

I believe that people should be free, that traditional morality was invented by people and we should be free to make new morals now that we know more. We can come up with anything we want. We can invent ourselves anew, we can ignore cultural norms and expectations, we can pass laws we like and ignore the ones we don’t like. Every one should be free to paint their pictures anyway they want.
Except Donald Trump.

My point was not that I believe that crap (obviously) nor that anyone does, but usually at some point in a conversation on morals it will come down to that and “don’t judge me, bro.” Especially around sex. But even there, as I pointed out on FB, we are not at all judgement free – ask anyone about the President’s locker-room talk, and there’s going to be a lot of judgement.

A priest mentioned a “throwaway” line in a book he had been reading, “Lust is the result/fruit/punishment of/for pride.” I’ve googled several permutation of that with no avail, but it’s kept me thinking for a while. Lust is the fruit of pride: for pride puts me before everyone and makes me want to have others serve my needs. At the same time pride denies me the intimacy that can come from real love, and I’m left not caring for people with whom I crave contact, sharing, human warmth. The end result is that sex works for everyone – you don’t need to worry if I’m a nice guy, just boink’n’bye. In turn, that level of disconnect, of misuse of the divine gift of our bodies, results in a passionate addiction. And so lust blossoms. It doesn’t matter if that’s a lot of activity with other persons, or with one person, or with oneself. Its root is pride, its symptoms are narcissism and a lack of intimacy, and the result is lust.

Or, to read it differently, the prideful person put himself before others, judging himself (dividing himself off) from them. And because he has judge them (divided them) off from himself, he can no longer be intimate with them. If you divide off others – you’ve really only divided off yourself. This is why the heretic, the one who teaches heresy, is not “kicked out of the church” but rather excommunicates himself: you cannot hold on to someone who doesn’t want to be held. Women feel judged by people who are opposed to abortion. Men who have sex with other men feel judged by people opposed to same sex marriage laws. These two statements can be true – that people feel judged – even when nothing but love has been expressed; when no division has happened. This is their own conscience speaking against their actions: calling them to repentance. That’s rather different than judgement. (Don’t get me wrong as I know the latter happens, too, but it’s different.)

Yet, at the same time, Jesus says we are to be merciful. That reminds me of a ditty from a book on word play that I read in High School:

The Lord makes it
to rain On the Just
and the unjust fellow
But mostly on the Just
For the unjust steals
The just’s umbrella.

We are to be merciful. God waits, wounded by our sins, waiting for us to come to him and ask for healing. God waits, pierced by the nails of our anger, for us to love him. God waits, not judging us – not dividing us off from himself – even though we have divided ourselves off from him. And we must aspire to do the same, to be perfect as our father is perfect: