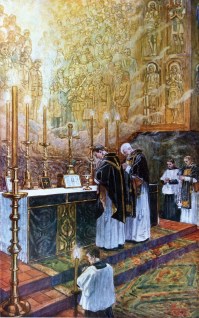 I’m given to understand that “back in the day” there were no “Vigil Masses” on Saturday Night and that proper piety in the West (as in the East) involved attending Saturday Vespers where one might also make confession. I’ve no idea if this “day” was 100 years ago or 1,000, but Saturday Vespers leading into Sunday seem a good thing.

I know also from my Anglo-Catholic days that at one time (up until the mid 20th Century) Sunday also included a parochial Sung Vespers (Evensong) service together with Benediction of the Blessed Sacrament.  The snarky queens in Seminary would call it Evenscreach and Cookie Worship before going out to serve the pious of whom they made such fun.

The Slavic Orthodox tradition serves something called “the All-Night Vigil” on Saturdays. Although it is usually only 2.5 hours long at the fullest, it can be made torturously into nearly eight hours of worship. Liturgically, though, it is “all night” in that it is Vespers and Compline of the previous evening, together with Matins and the first hour (Prime) of Sunday. So leaving Church at some late evening point on Saturday, it is already Sunday at Dawn, in liturgical time, anyway.  This is not done in other Orthodox traditions, perhaps because the long Russian Winter Nights required the whole parish to pray together for warmth.

Read as a package, all of these events from the Slavic Vigil service to the Anglo-Catholic Benediction, with Sunday mass in the middle, of course, can be seen to be ways of “extending the Sabbath”, of letting the weekly Feast of the Resurrection be longer than just one midmorning Communion service. This is, it seems to me, a laudable practice. Yet if one were to try to attempt sch a thing in a modern, Novus Ordo parish there would be a mass on Saturday night, and probably two more on Sunday afternoon and evening that would get in the way. Vigil Masses and multiple Sunday Masses are pastoral necessities, dictated by the cruise-ship size of many parishes as well as the work schedules of many people for whom 9-5 M-F is a middle class, mostly White, largely Suburban possibility. What follows, therefore, is only a doodle, a sort of Fantastic Liturgical Voyage, using the tools available to a parish of a certain size, in a way that would be fully within the Western, Catholic tradition and using it to the fullest.

Saturday Evening: A seemless wedding of Vespers with the Office of Readings, including the Vigil Canticles, Resurrection Gospel, and the Te Deum.

This is done by moving the intercessions from the end of Vespers to the end of the Office of Readings.

The Psalms and Canticles could be chanted by the congregation and the choir, or else a little of both: with the choir doing fancy versions, whilst the Congregation sticks to antiphonal chanting and/or reading. There are hymns appointed, although there are many available. Using the Psalm Prayers and adding a Homily would make this a fuller experience, as would laying on of incense at the Magnificat and at the Te Deum. Venite optional…

Early Low Mass on Sunday w/Morning Prayer.
This is currently done at my Dominican Parish on Saturday. The Psalms of Saturday Morning Prayer are chanted before the Penitential Rites, with the Benedictus sung as a post communion. This could be done as easily on Sunday.

Pull out all the stops for High Mass on Sunday.

Then, Sunday evening, once again with the Psalms, serve Evening Prayer and Benediction, followed by Sunday Compline. Incense at the Magnificat, at Benediction, and at the Nunc Dimitiis in Compline.  Again, take the intercessions from the end of Vespers and add them to the end of Compline.  If needed a Homily or reflection could be done after the Benediction.

I would, fantastically, add shared parochial meals before the evening services and after the High Mass.  This also comes from Byzantine practice, and as a community building tool it cannot be underestimated. Let the men’s club do Sunday night, the Women’s club Saturday, with the Youth doing a perpetual Pancake brunch on Sunday.

Again, just dreaming.  But if you got a Liturgy of the Hours book handy, you can see what all it could be.