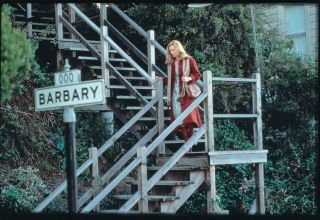 Sometimes there’s a sort of frisson around SF, that I belong here, that this is home in ways I can’t explain, that – as Anna Madrigal says to Mary Ann, “You’re one of us.”  She means Atlantean because it was a good HippieSF idea that when all the Atlantean souls reincarnate they will all move back here and the whole thing will fall into the Sea again.  But… ok.  One of us. This week, however… well, really, in the three weeks since the Easter Vigil, it’s been more like a whirlwind or earthquake, the latter being, perhaps, a better choice given the locale.

When I first visited SF in October of 1996, I craved to be here. It was love at first sight. In April 1997 I lived here, having quit a job of ten years and sold nearly everything I owned. I moved in with Patrick, a friend from college, and started to find a life. By May I had one: a job. An apartment followed shortly. And boom.

I left in 2003 for a number of reasons I won’t go into. But I had the blessing of my priest (Fr V) and thought I was done. But I wasn’t. When she came with me to SF on Easter 2010, Sarah said that all the things I make fun of Buffalonians for in Buffalo are true for me here. And I thought she was silly. Less than six months later, I was back. And two months after that I had a job and an apartment. Boombidy boom. As Jay pointed out being able to live on your own in SF is evidence of success. I’ve done it twice. I don’t credit that to myself, save that I have a low bar for where I’ll live. But it is a great thing to have.

When the Job ended in Jan of 2015, it felt as though I should do something else, and, although I won’t say I messed up – b/c a lot of things have been learned – I did make a wrong choice. Everything was sold or given away, and off to the Benedictines I went. And six months later, that ended. So… where to? Mom and Dad for a short while (and for a man over 50 that’s an odd place to be) and suddenly Sejal made it possible to come back here.

Then I decided I was going to say: that this time I was here for good, making my vow of Stability here. Am I the only person who loses a job and moves 3,000 miles? How about, the only person who does it repeatedly? And then things happened again. A job. Boom. A place to live. Boom. A church community. BOOM. (Bigger Boom.  A huge boom, really: an 8 megaton, Dominican BOOM.) And all kinds of Atlantean awesomeness.

I feel like Sally Field. I mean I know I have friends who love me, but I have a home too, a real home. That is SUCH a blessing for a man over 50 to have.

PS: The header shot is Mary Ann Singleton coming down the steps at Barbary Lane. Once there was a scavenger hunt at my office and I sent the entire company there. When I left here, in 2015, saying goodbye to those steps made me cry. So.

Thanks, God. Thanks. I really mean it.