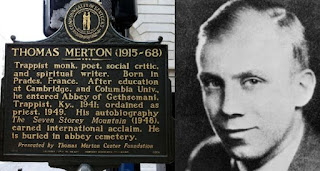 At the tweeted suggestion of Steve, aka Steve the Missionary, as part of my post-RCIA Catechesis (Adult Reading for the Catholic N00b) I’ve been reading Thomas Merton’s Seven Storey Mountain: An Autobiography of Faith (from which edition all the page numbers are cited below). I very much dislike autobiography, to be honest, as of course would anyone like me who spends hours a week blogging a real-time autobiography. My ego is too big to make room for another’s… but I first met Thomas in high school, reading The Sign of Jonas, and although the meaning of that book escaped my young self, this one punches in the gut from nearly every page, and not occasionally takes away breath, rips out tears, and stuns with phasers aimed at the heart.

It’s not expected. More Merton is heard from Liberal Mainlines than one cares to note. Merton is the Liberal Mainline’s go-to Catholic. I had no idea at all that the warm, fluffy, nearly New Age Merton I keep hearing quoted by the Spiritual but Not Religious would ever rip a new one like this:

How did it ever happen that, when the dregs of the world had collected in western Europe, when Goth and Frank and Norman and Lombard had mingles with the rot of old Rome to form a patchwork of hybrid races, all of them notable for ferocity, hatred, stupidity, craftiness, lust and brutality — how did it happen that, form all this, there should come Gregorian chant, monasteries and cathedrals, the poems of Prudentius, the commentaries and histories of Bede, the Moralia of Gregory the Great, Augustine’s City of God, and his Trinity, the writings of St Anslem, S Bernard’s sermons on the Canticles, the poetry of Caedmon and Cynewulf and Langlad and Dante, St Thomas’ Summa, and the Oceniense of Duns Scotus?
How does it happen that event today a couple of ordinary French stonemasons, or a carpenter and his apprentice, and put a dovecote or a barn that has more architectural perfection than the piles of eclectic stupidity that grows up at the cost of hundreds of thousands of dollars on the campuses of American Universities? (7SM, p33)

Yet it is not cultural punches but the Spiritual Journey for which one goes to Merton. Journey is not the right word: Merton is not on a happy-go-lucky labyrinth-winding pilgrimage without possibility of failure here. Merton’s engaged in Jihad, a spiritual struggle, a Podvig as the Slavs would say.

Souls are like athletes, that need opponents worthy of them, if they are to be tried and extended and pushed to the full use of their powers, and rewarded according to their capacity. (7SM, p92)

He’s aware in hindsight (even though he was not in real-time) that he had lived on the edge of a precipice, that he needed only to stumble one way too far and all would have been lost. He knows, again in hindsight, that the world almost got him.

And so I became the complete twentieth-century man. I now belonged to the world in which I live. I became a true citizen of my own disgusting century: the century of poison gas and atomic bombs. A man living on the doorsill of the Apocalypse, a man with veins full of poison, living in death. (p94)

Then he quotes Baudelaire, but he’s talking to the reader… Hypocrite lecteur, mon semblable, mon frère… (??).  Thomas puts the reader in his own life: this is not the ego of the blogger who puts his own life before the reader to say “look at me” this is the kenotic love of a spiritual writer who says, “you are where I was and I’m worried, praying, holding a little light…”

There’s more anon… I’m 256 pages in already, but it’s so stunning that I have to take time to digest.