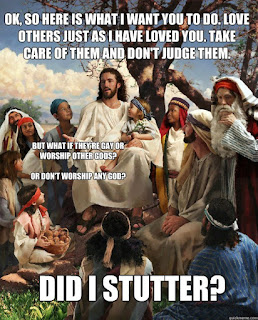 Dixitque ad Aaron: Quid tibi fecit hic populus, ut induceres super eum peccatum maximum?
Moses asked Aaron, “What did this people do to you that you should lead them into a grave sin?”
Exodus 32:21
Recently, I’ve been blessed to have two friends who are on my back all the time about walking out of Church when it’s not about me. I’m not sick. I don’t need anointing. I don’t need prayer. It’s not my wedding. I don’t know those people. What do you mean, I should stay and pray for the kids? I pick up all that in my daily practice. I want coffee now.
I’m cutting myself off from the community when I do that: when I could be doing one of the works of mercy, interceding for the living and the dead. I’m failing in love: I’m cutting people off.
The Israelites, you may remember, are involved in idolatry (the Golden Calf). They have despaired of Moses coming back down the mountain and, in truth and logic, are rather afraid of the Thumber Boomer that is hovering over Sinai. They decide they’d much rather have a nearer deity, one that they can control. So they make one.
Aaron decides to help them.
Moses puts the blame squarely on Aaron – even though Moses will later plead for the entire people of Israel before God. “What”, he asks. “Did they ever do to you that you let them sin like this?”
Were Moses alive today, Aaron would have a much better response:
Whoa, dude. Don’t judge them. That’s all they can handle. I love these people – like God does – i would never make them do something that was too hard for them. God made them this way: so, what harm is there. Try to be more loving…
We use that tack on everyone.
Jesus, would, perhaps, agree.  But he would school the Christians first (the pagans have other issues…)
We are exactly supposed to love.  And, exactly, we can’t judge.  But what do those things mean?
Well, “judge” means to presume God’s role: the Greek is κρίνω, krino  and it means to cut off or to cut out. When I judge you I cut you off from God’s mercy (mentally, that is) I can’t damn you to hell. And, when it comes to weighing your sin against mine, mine out classes yours by several metric tonnes every time. So… don’t judge.
But love, now… our current understanding of love (like my understanding of Good, yesterday) is a bit off, flaccid, impotent. We don’t want love: we want disinterested regard. We want people to smile and let us alone. We don’t love, we smile and look the other way. Or, sometimes, we watch. But we never actually consider – because that might make someone feel judged.
To Love, though, to ἀγάπη agape someone, in the way of God, after Jesus’ commandment, is to will the good of the other – even to your own sacrificial death.
The good of the other, though, is not a license to do whatever the other wants. Sometimes they don’t want the good, the beautiful, the true. To love them is to want them to move that way. (Although that same love should know that to force is impossible: love woos, draws, invites.) To Love is to dance. But also, realizing when some steps are out of order, to Love is either to correct or let go; to show them the right steps, or to move out of the way so that no one gets trodden upon. 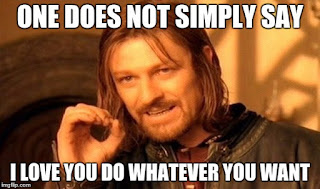 Love does not simply say, “I will always love you, do whatever you want.” Love says, rather, “I love you. I will always hope, will, work, and desire for you to come with me on the journey to beauty, goodness, and truth, no matter what you are doing contrariwise.” If asked, Love should be honest and say, “Yeah, don’t do that because it’s not the best thing for your salvation, and I would really want you saved: before me, even.”
I fail in love constantly.
Look at today’s Gospel.
Simile est regnum cælorum fermento, quod acceptum mulier abscondit in farinæ satis tribus, donec fermentatum est totum.
The kingdom of heaven is like yeast that a woman took and mixed with three measures of wheat flour until the whole batch was leavened.
Matthew 13:33b
I heard a Bible scholar once talk about how, in those days, yeast was not a powder that people could buy at the store, but rather yeast was a culture that people carried around and they were afraid to lose it. This woman, he said, had done something foolish and lost her yeast by using it all up. (That, happily in his eyes, robbed this saying of all meaning and, therefore, Jesus never said it.) For all that he seemed to know about history – and all he claimed to know about the Bible – this teacher knew nothing about baking bread or keeping yeast happy.
Yes, you do as he said. And, yet, yes you do as Jesus described. You leaven all the flour – and then you set aside a cup or so of the mixture for the next time. Jesus knew his Momma’s recipe: he knew how to bake bread. Jesus is telling us that if we do our job as Church (that is, as the Kingdom of Heaven) the entire world be leavened: will become the Kingdom.
Yeast does not raise bread by disinterested regard.
Yeast needs to get into the flour, pardon the pun. Yeast eats the flour, burps out gas and has babies. This is the bread rising, the babies have babies, they burp out more gas, everything changes.
The Church is not the Church, the Christian is not the Christian, if she is not loving – that is actively willing and working for the good of the world – the changing of the world, the salvation of souls around us, the making of everything into the Kingdom, that is the Church.
What did this people do to you that you lead them into such sin? Jesus will ask of you when you have let your children leave the Church without a fight. When you have let you friends go their entire lives without realizing what you do very secretly (it seems) on Sunday (only, it seems). Jesus will remind us that we were not supposed to Judge – but by walking away, we did exactly judge. We didn’t will the good of the other, so we failed to Love. We cut them off from what we would imagine to say is the most important part of our lives. We judged them unworthy.
Aaron was not only failing in love, he was actively allowing the people to sin. He was cutting them off from God. He was committing krino – cutting them off. Judging.
The Church does not love us when she leaves us in sin, her priests are not loving when they leave us alone. They are cutting us off from the path of salvation, they are judging us.
You – me – we may not be commissioned preachers, but we are commissioned to love and not judge. To will the Good of others to our own detriment. To do less is to cut them off, to judge them. How do we do this in a world that doesn’t even want to countenance the idea that “good” is anything less that “what feels good to me”? I don’t know. The whole world fears not feeling good – us too: it’s fear of not feeling good that keeps us in disinterested regard.
I should be giving of myself, my talents, my gifts to the Church, to those who need my prayers, who need the grace God has given me for no other reason than to share it with others.
We need to step out of disinterested regard. To be the Church – and to put up with what that might effect in our lives.
Scary, huh?