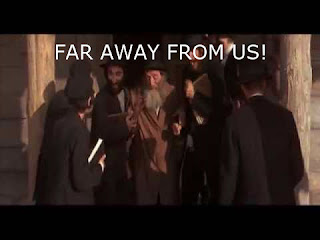 Obsecro igitur primum omnium fieri obsecrationes, orationes, postulationes, gratiarum actiones, pro omnibus hominibus: pro regibus, et omnibus qui in sublimitate sunt, ut quietam et tranquillam vitam agamus in omni pietate, et castitate: hoc enim bonum est, et acceptum coram Salvatore nostro Deo, qui omnes homines vult salvos fieri, et ad agnitionem veritatis venire.
First of all, I ask that supplications, prayers, petitions, and thanksgivings be offered for everyone, for kings and for all in authority, that we may lead a quiet and tranquil life in all devotion and dignity. This is good and pleasing to God our savior, who wills everyone to be saved and to come to knowledge of the truth.
1 Timothy 2:1-4

St Paul, writing to St Timothy, says Christians should pray for all in authority. The emperor Paul wants us to pray for, here, is Nero. This is important. Why? Because I don’t think we have a choice. No choice at all: our duty is to be in the world as the soul is in the body, as leaven is in flour. We have a job to do.

What this means is we need to praying hard for President Trump.

And what should we be praying for, what are we commanded to pray for? That he will keep the peace long enough to let the Church be the Church, ut quietam et tranquillam vitam agamus in omni pietate, et castitate, in all piety and chastity, to use a bad English rendering of Jerome’s word choice here. The Greek includes elements of dignity, probity, and purity. Gravitas might have been a better Latin word (building on the Pagan Roman virtues as understood then). Translation always leads to simplifications. Castitate includes emotional and physical elements that can be understood to include modesty, will, the affections, and all the senses, also our interactions with our memories, fantasies, conscience, etc. “Chastity” however, sounds like a code word for “not having sex”. So, ok, the NABRE goes for “dignity”.  I prefer Courage to Dignity, as the former is more Catholic. But I see where the NABRE was going with it, anyway.

That’s it, really. I think there’s nothing wrong with writing letters to the Emperor to say, “You did a bad thing”, but the whole point is to get the gov’t to let the Church be the Church. To let Christians get about, quietly and unmolested, being Christians at each other and the world. We don’t need an assist from any of the political parties. Our job is not to force the gov’t to be Christian (although if Christians get into Gov’t that is *exactly* their job). But rather, our job is to subvert the order: keep things quite out there, we’re saving the world.

Our job is not to overthrow the unjust, nor to change the laws. Our job is to ignore them, subvert them, live as if they didn’t exist. Can the Church decide that someone has to go? Yes, the Pope’s the Vicar of Christ. But until then, pray for peace and do the Kingdom’s work in the vast expanse of interstitial space-time. Do it even if the Emperor isn’t doing his job at keeping the peace.

Take as your example all those first century protests, barricades, bottle rockets, picket lines, and letter writing campaigns. They didn’t make saints then… they won’t do it now.

I’ll close with Merton, from the Seven Storey Mountain.