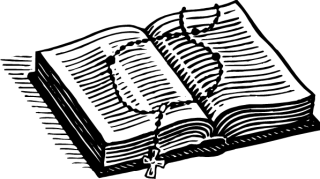 15 years ago I started a daily post on the assigned readings in the ECUSA Daily Office.  It was a two year commitment, and I made it all the way through. Most weeks I missed one day (some weeks 2), and if I went on vacation, I announced the downtime.

This process involved research and meditation, prayer and writing. It replaced television in my world: it became the thing I did every night after supper, most nights right up til bedtime. It was, sort of, Electronic Lectio Divina, and – I’ve learned – it was also very Dominican: Contemplation, and sharing the fruits of Contemplation. But it was the most fulfilling of all my blogging (legit blogging since October of 1998, and email-based journal sharing since 1994… gadzooks). By fulfilling I mean that it evolved until it was a teaching, training, and growth tool both for readers (as I heard) and for the writer.

After those two years I tried to move into the Eucharistic Lectionary but life got in the way. I’ve made daily Bible-related posts from time to time, but never with a solid commitment to do so for a period of time.  I want to do so now: next Sunday we begin Advent, the first season of the Church year. In the Roman Catholic Sunday Lectionary, we are beginning year B (of three years), and in the weekly Mass readings we’re on year 2 (of two).

My Commitment is to do the full three year Sunday Cycle (which will hit the two years of the daily cycle as well).  So, starting on Sunday 3 December 2017 and going to Saturday 28 November 2020… here we go.

I hope you’ll come along for the ride…

Addendum: Rather than repeat Year 2 of the daily Mass readings, for 2019-2020, I’ll try to do the one-year Daily Office readings…