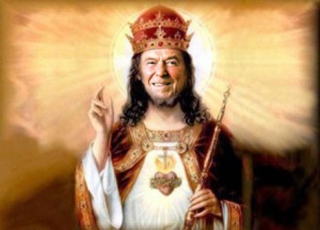 ✙
JMJ
The Readings for Thursday 1 Advent (Year 2):
Dixit Jesus: Non omnis qui dicit mihi, Domine, Domine, intrabit in regnum cælorum: sed qui facit voluntatem Patris mei, qui in cælis est, ipse intrabit in regnum cælorum.
Jesus said: “Not everyone who says to me, ‘Lord, Lord,’ will enter the Kingdom of heaven, but only the one who does the will of my Father in heaven.
Not everyone who says “Lord, Lord.” It’s tempting, isn’t it: to assume that means someone else.
But Christianity’s teaching “Do not judge” leaves us with a conundrum. Unless it is your calling to adjure and preach, all sins are in the first person, only. Even if it is your calling to preach, condemning others directly is never a good way to preach – although it can work sometimes. No… I am the only sinner I know. All others are Christ.
So, not everyone who says, “Lord, Lord” will enter the kingdom… that means me. Sins are in the first person: it is I, saying “Lord, Lord” who are in danger of damnation. And so, with that heated introduction, to our topic:
Quia incurvabit habitantes in excelso; civitatem sublimem humiliabit: humiliabit eam usque ad terram, detrahet eam usque ad pulverem. Conculcabit eam pes, pedes pauperis, gressus egenorum.
For he shall bring down them that dwell on high, the high city he shall lay low. He shall bring it down even to the ground, he shall pull it down even to the dust. The foot shall tread it down, the feet of the poor, the steps of the needy.
I’ve posted this before, forgive me, but One day in 2010 Cam Miller, Rector of Trinity ECUSA in Buffalo, NY, teaching an adult ed class on the Gospels, asked us to list “classes of people” in the Gospel stories and, as we were confused, he started a list on the board with 1, 2 and 3. Then we figured out the pattern and got the rest of it:

We came up with a few more as well. Then Cam asked us “Who are we?” The Apostles was a logical choice. But Cam pointed out that’s who we would want to be, but, as far as the story goes… “Sinners!” Yes, that’s true, but I mean, in terms of current parallels none of these categories fit. Who are we, in terms of history as we sit here in Buffalo, NY, in the middle of winter?All of these people, in the Gospel story, live in Judea (he used the Anachronism of “Palestine” but set that aside for this post). Judea is an outlier province in the Roman World where taxes are collected and olives are harvested. It is not, however, a place where olives are eaten – they are sent away. It is a place where bad politicians get sent by the Emperor for “special assignments”. It is a place where “Keeping the Peace” is a imperial command that is impossible to keep and one’s own death sentence.Do we live in 1st Century Judea? (NO!)Ok, then where are we?Americans, in terms of the Gospels, are none of the people in Judea. We’re not in the story at all except as an “unseen hand”. We are most closely paralleled to Rome, to which all taxes go, all goods are sent, and from whom no secrets are hid. We are the gobblers and thieves who send out armies to “keep the peace” only so much as it benefits us (where “us” is defined as the bankers and companies that keep Americans shopping). We are Rome. What little good others get from our benignity is because we get a greater good from it. We do not send Charity so much as we send blood money. We speak of the Law of Supply and Demand as if we had not imposed it on the world with our guns.In the end, Christian morals and ideas about purity, morality, equality, justice, and the Kingdom of God undercut the Roman Empire so much she had to start killing the followers of this new cult.Please, God, it were so now.

In a fit of realism, as I type this on a cheap computer, sitting under lights lit by energy paid for by farmers in Kansas, sipping coffee made by underpaid farm workers in various parts of the world, wearing clothes sewn by hands well sweated in Target and Kmart, I wonder what can ever be done. I have a lot of stuff I didn’t work for. I have a lot of stuff paid for by the blood of others. Even the foods I eat are harvested by the hands of wage slaves who come to our country because we have ruined theirs with our our politics and trade agreements. St Paul says to all of us, “Such people we instruct and urge in the Lord Jesus Christ to work quietly and to eat their own food.” Yet we have, instead, become Rome. We are the rulers of the world, the exporters of the violence that moved west with a Young America. We are the killers and the spoilers. What Marshal will stop us?
I know that some part of the world thinks we may have elected our own Nero or Caligula. Although either would be disastrous, neither were anywhere near the end of the Empire. In fact, they were the beginning of the seriously bad part. But I do fear the wrath when it comes. And it won’t be God, as such (although by his will): it will be by the hands of those we’ve chained to the machines that make our stuff.
One day, and please God, soon: they will say of America, as they say of Rome, The foot shall tread it down, the feet of the poor, the steps of the needy.
And maybe, like Rome, this will be our Salvation; But Rome is the Eternal City, and we only need one. I have no hope this will be so. For the Christian revolution cannot possibly come to a country that thinks, already, it is Christian, where we are all bound in our individualism and our greed to make choices: I value a whole lot of things more than the Gospel. I’ll wager you do as well.
Not all who say, Lord, Lord…