I will greatly rejoice in the Lord, and my soul shall be joyful in my God: for he hath clothed me with the garments of salvation: and with the robe of justice he hath covered me, as a bridegroom decked with a crown, and as a bride adorned with her jewels.

There’s so much rejoicing in today’s readings! It’s the theme of the Sunday: Gaudete Sunday. It’s why things are pink today, rather than purple, which is the new thing, actually. Let’s have some geekery!

In the old days the color of penance was not purple, but rather “Lenten Array”, a sort of unbleached linen or wool that may have had red and black decorations attached to it but, over all, penance was the absence of color. Lent hid all the festivities behind a wall of bland. In a culture without TV or much theatre, the High Mass on Sunday was the entertainment. Hiding the color was bad. In that Advent is a penitential season mixed with joy, the Masses of Mondays, Wednesdays, and Fridays in Advent were, in fact, Lenten masses. Sunday, however, was another thing entirely.

The Catholic Encyclopedia adds, “Pope Innocent III (1198-1216) states that black was the colour to be used during Advent, but violet had already come into use for this season at the end of the thirteenth century. Binterim says that there was also a law that pictures should be covered during Advent. Flowers and relics of Saints are not to be placed on the altars during the Office and Masses of this time, except on the third Sunday; and the same prohibition and exception exist in regard to the use of the organ.”

The Sundays of Advent were colored differently in different places: In England, for example, they are blue. This is the Sarum usage and may reflect Sarum’s link with the East where, as in Sarum, this is the color of Marian feasts. 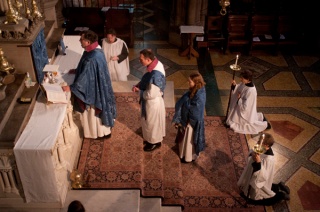 But Rome and Sarum both have this Sunday as Pink – or a richer purple. It is common today to refer to a color called “rose” which seems a species of preciousness and even homophobia rising from our very modern idea that “pink is for girls.” Rose is a shade of pink, ergo the vestments are pink.

Keeping it in the pink is a colloquialism for healthy. On Caucasians, at least, it’s better than having no color at all, and not quite the purple of a bruise, or the red of exhaustion. It’s the pink of healthy.

Health – as we are remembering now – is not just a matter of a well-oiled machine working as planned. We are not healthy at all when we are dis-eased by anything in our life. And, since I am a walking Essay on Anxiety, I get it. The constant battering of emotions, the stirring pains of what if, the shock and horror of “they saw me.” I hardly get through a day without realizing that someone hates me and wants to fire me. Most days I’m happy to get home, to see my cat and to hide. I am, in fact, hiding now. This week has been overwhelming and the inability to get my writing done in a timely fashion (this essay is late) has resulted in a slow down-spiral of, if you will, emotional debt. I feel like the person in the well, digging deeper in an effort to get out.

I am not in the pink. And then there are today’s readings.

Isaiah says “induit me vestimentis salutis, et indumento justitiæ circumdedit me” speaking of garments of salvation and a robe of justice. The reading is reminiscent of both Our Lord, in his moment of self-revelation in the Nazareth Synagogue, and also of Our Lady’s Magnificat. Like mother, like Son! And yet it is a reminder that we, too, are so clothed. We, too, are so wrapped. So we, too, should be joyful in God and sing his praise.

In his first Epistle to the Thessalonians (5:16-18), St Paul opens out this mystery by a tripartite command:
Semper gaudete.
Sine intermissione orate.
In omnibus gratias agite.

The Latin obscures it a little, but the Greek is clear as day: ἐν παντὶ εὐχαριστεῖτε. en panti eucharisteite. In all things, do Eucharist. It’s a command: Present, Imperative, Active. Do this thing now (and it’s always now). Yes, I know, it say “Make thanksgiving” but we’re Catholics. En Panti Eucharisteite means just what it says, In all things celebrate Eucharist. The commands make sense now, really, “Always rejoice, never stop praying, and make everything into Eucharist.”

I thought of this Friday, walking to work in a funk. And I pulled out the Akathist, Glory to God for All Things, to sing my way around it. (It kinda worked.)

The thing is we are to make thanksgiving for all things.

Think about that. En Panti. All things.

How many things in your day today, have been worthy of Thanking God? How many did you remember to do so for? We are to thank God for everything. The hymn was written in a marxist gulag.

When the lightning flash has lit up the camp dining hall, how feeble seems the light from the lamp. Thus dost Thou, like the lightning, unexpectedly light up my heart with flashes of intense joy. After Thy blinding light, how drab, how colourless, how illusory all else seems. My souls clings to Thee.

We are to give thanks for everything. St Nikolai of Zica even blesses God for his enemies.

I’ve only just gotten around to figuring out how to bless God for the layoffs two years ago next month. How different would this all have been if I had been able to say Thank You in that moment of time instead of running in fear as I did?

The dark storm clouds of life bring no terror to those in whose hearts Thy fire is burning brightly. Outside is the darkness of the whirlwind, the terror and howling of the storm, but in the heart, in the presence of Christ, there is light and peace, silence: Alleluia!

Yes, I know there are drugs that help us function in spite of Anxiety. But that only schools us in taking drugs. What are we to learn in giving thanks for even the fear that cripples us sometime?

Christ has walked this road before us, crippled with fear in the garden, and sweating drops of blood. The pains of this world have become the healing salve that will bring us home. The world is the same, the map is the same, the wiring has been undone, the code has been hacked: the outcome is different.

That way you’ll keep it in the pink.