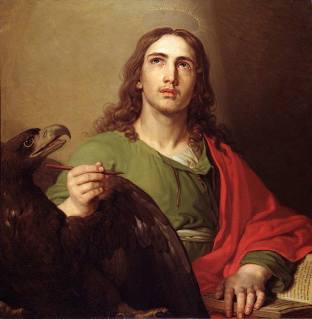 The Readings for St John’s Day:

Quod fuit ab initio, quod audivimus, quod vidimus oculis nostris, quod perspeximus, et manus nostræ contrectaverunt de verbo vitæ: annuntiamus vobis.
That which was from the beginning, which we have heard, which we have seen with our eyes, which we have looked upon, and our hands have handled, of the word of life: we declare unto you.
John’s talking in Code here about Jesus. Jesus is the Word of Life that John has seen, heard, and touched. Our faith is based on empirical evidence. John, sitting at home with the Theotokos (“Son, behold your mother…”) would have known so much more. from his own experience than so many others. And he never stopped teaching and proclaiming. He never stopped declaring unto anyone that would listen. Tradition says he was the last one left alive (and so started as the youngest of all of them). And that he taught St Ignatius of Antioch and St Polycarp of Smyrna.
At which point should someone who made it all up just fess up? I’m sure if the last living apostle had said, “There was no resurrection” that would have been the end of all these shenanigans. If you die for something, certainly you must think it worth dying for. But if you grow old, wither, and just fade away, it must be a great mystery indeed: if it is worth living for.
This is called the White Martyrdom: to die for a faith well lived, to end one’s life in the arms of Jesus, Mary, and Joseph, peacefully falling asleep, wandering far in visionquest from where were were born, maybe, but each day coming so much closer to home.
We – you and I both – can be in our life this most beloved disciple of the Lord.  John’s Martyrdom of the daily grind is available for all of us. We can know Jesus, touch him with our hands, see him with our eyes, hear his teaching, take care of his mother, and in the end, just quietly die.

The action of the Mass is a door through which we are instantly transported to heaven if we only have the eyes and heart to see. We may never have visions of the Lamb of God moving quietly through the Lampstands if we only attend Liturgical Dancing masses, the Novus Ordo has the right visuals when done properly. The Divine Liturgy of the East is close (if you could see behind the iconstasis), and so also the Extraordinary Form, the Latin Mass.

Jesus is in our midst. He was born a child and reigns as King. You don’t have to “imagine” it. You don’t need to “pretend”. It’s real. John – and his entire generation – gave their life for the truth of it. Then so did Ignatius and Polycarp, and much of their generation. And after them thousands of others. It’s here for you and for me, for all of us to enter. There is someone calling our name from among the Lampstands, calling us to follow.

All you have to do is see Jesus once and like Wandering Aengus, you will be drawn forward forever until you can fall in love for all of eternity.

Come, see him, hear him, touch him, love him. Care for his mother and grow old and die to know the Truth.

You will know the Truth and He will set you free.