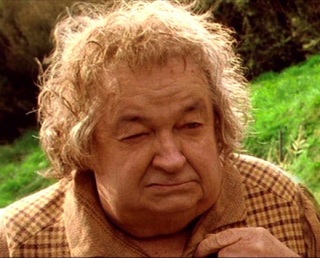 The Readings for Thursday, 2nd Week of Ordinary Time (B2):

Non rectis ergo oculis Saul aspiciebat David a die illa et deinceps.
And Saul did not look on David with a good eye from that day and forward.

The king is very angry at David and he gives him a little side-eye, as the kids say now. The NABRE says “was jealous of” but side-eye is better. The Hebrew is very mangled, but the Greek in the LXX is as the Latin, using ὑποβλεπόμενος ypoblepomenos, to look askance.

Saul is giving David the Evil Eye. In fact it’s only here, in this story, that it even shows up in the Old Testament. Saul goes all ὑποβλεπόμενος on David.  The word is not at all in the New Testament. Can you imagine that Jesus ever looked on anyone ὑποβλεπόμενος?

The evil eye is such a part of Television: antagonists will do it to each other over the garden fence or through lace curtains. In the 80s it was a thing for Alexis to give over cocktails, or JR to shoot over a horse. In the 00s it was something for Boardwalk Empires and Games of things with swords. You look, you let your hate seethe forth. Then you look away. Best, though, if you can lock eyes with (the camera and) your antagonist during the seethe phase.

Even not believing in the “curse” of it, we still do it though, yeah? Gary Trudeau had it all over Doonesbury. A given character would close off a dialogue and their eyes would go all square. They’d look at the reader and there would be this seethe moment. I think I learned it from there, really. I was totally fascinated with that squared eyeball lock.

I know we no longer believe in such things, but how often do we give the evil eye to even our friends? I did it recently at a dinner party without thinking. There it was, that square-eyed look, that seethe.

I think that needs to stop, folks. Seriously. Not just me, and not just our politicians. But looking at someone as if you could curse them, in general, is not a good look on you – on any of us.

Cursing is right out. Even with eyes only. Can we rise above this?