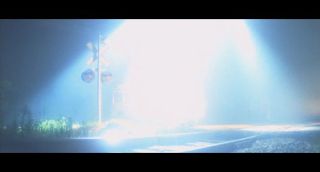 The Readings for the Feast of the Conversion of St Paul
Thursday, 3rd Week of Ordinary Time (B2)

Ego sum Jesus, quem tu persequeris : durum est tibi contra stimulum calcitrare.
I am Jesus whom thou persecutest. It is hard for thee to kick against the goad.

Kicking against the goad is such an image, isn’t it? Driving your car the wrong way over one of those pointy sharp tire traps that keep you going in the in ramp and out the out ramp. Like that but for horses.

You have to admit that personal evangelism from Jesus is a big thing. What would you do if Jesus were to appear before you in a blinding light with any proof you want that it was, in fact, Jesus? What would you do?

What sort of questions would rush through your mind?
How could you know it was actually him? Folks way better at holiness than I have been tricked by demons claiming to be Jesus. Folks way smarter than I are tricked all the time. (By their fruits, etc)
In the Orthodox Church if an icon starts to weep or gush myrrh, or blood or something, the first thing that happens is an exorcism is performed.
If the Orthodox Church can’t tell at first blush about even the holiest of things (Icons), how would you know?
And so, how did Saul know?

How do you reach the decision to reach out to Truth himself, standing before you?
In a few years, Saul (now Paul), would go from “breathing out threatenings and slaughter against the disciples” to dying for them.

Astonished? Yes, I would be too at the words coming out of my own mouth.

We know all the stories that come after that. But how that split second changed the world! How that moment between goad and Lord made all the difference.

Saul, does it hurt when you do that?
Yes, Lord.
Then don’t do that.

What has worked for me is hearing the Voice through the voice of others who, likewise, heard it through the voices of others. The entirety of the gospel works that way: Luke says he researched everything, interviewing eyewitnesses etc, before he wrote it down.  But the words are not powerful: it is the telling of the words. In the hearing of the stories of others who, too, have come from this Savior speaking the words of Grace.

Whose life will you touch when you leave the presence of the Lord and share it with others? When you speak, who will be transformed? Where will your light shine?