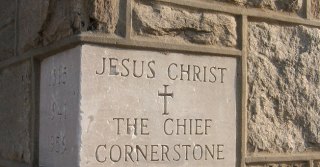 The Readings for Friday in the 2nd Week of Lent (B2)

And Juda said to his brethren: What will it profit us to kill our brother, and conceal his blood? It is better that he be sold to the Ismaelites, and that our hands be not defiled: for he is our brother and our flesh. His brethren agreed to his words.

Almost three thousand years after this text was written, “Ishmaelite” was another term for a follower of Mohammed, but at the time of this story, the Ishmaelites are just another clan of the same family. Remember that Ishmael was the other (older) son of Abraham. Isaac, his younger brother, was the father of Jacob and the grandfather of Joseph and his brothers. The Ishmaelites are merely the cousins from another part of the country. They seem to be doing well for themselves, as traders. Nu? We should give them something to trade.

To recap, Israel begins with Abraham running away from his city to a foreign land. His son is nearly slain in child sacrifice. His grandsons fight over their birthright, and his great grandsons engage in child trafficking. We’re off to a good start.

Joseph is seen by the Church as a prophetic foreshadowing of Christ. His story is read in both the Eastern and Western rites of the Church in the “middle weeks” of Lent; in the west this is so in both lectionaries, for the “New Mass” and the traditional rite. Joseph, as foreshadow, is important because he is sold into slavery and, as we shall see, overcomes temptation and sin, yet is a wise prophet and, in the end, liberator of his people. And he gets one of the most famous lines in all of prophecy.

But for me, today, it’s important to note that we’re selling the boy to our cousins.  All parts of Abraham’s family were connected and, so, without playing on the family politics, it seems to me that more than just the brothers must be seen as acting here. With brothers like this, who needs bullies?

When we turn this over to God, he uses it. If you know the rest of the Joseph Story (closer to Easter) you know that Joseph eventually says, forgiving his brothers, you thought you were doing me an evil deed but God used it for good. That’s the best line ever.

Did Joseph feel that way early this morning, wandering out to the brothers in the fields and getting kidnapped? I really doubt it. In fact, I doubt he felt that way ever. But he must have been praying and trying to grow in righteousness until he realized that was what was up.

That’s what we’re called to do when stuff is breaking around us. We are called to pray and do righteous things. Wisdom will grow with patience until in the end the meaning is clear.

The same stone which the builders refused
is become the head-stone in the corner.
This is the Lord’s doing
and it is marvellous in our eyes.

What is true of Jesus is true of all of us: the weakest link is God’s point of access. Whilst bad, yes, the stuff that’s happening around us is for our salvation – and the salvation of others as well. And it seems the place we are weakest is the place we can be made the strongest by God’s grace. All the pain makes a strong cornerstone: all the weight is supported there.

In the end we will see: it’s all been marvellous.

PS: Around the internet, looking for a nice pic of that “marvellous in our eyes” text, I’m so surprised at the number of folks who credit to Queen Elizabeth I without noting that she was quoting the Psalms. Around SF there are posters just now citing a Gospel text as if it were spoken by Abe Lincoln. I find that amusing as well.