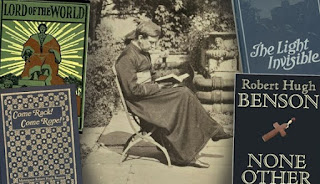 The Readings for the 3rd Sunday of Lent (B2)

Non habebis deos alienos coram me.
Thou shalt not have strange gods before me.

There are spoilers in this essay relating to the plot line of a very good book. But the book was published 100 years ago, so it should be ok.

There are those who say that there is proof in the Old Testament for other gods. Even God himself acknowledges other gods. Of course there are other gods – only a fool would not realize that. If reality exists, there must be fakes as well. But the other elohim are not gods like YHVH, even if they are gods in our heart. The Exodus text in Hebrew uses the word “Elohim” for “gods” here. But in the book of Genesis, it is the Elohim, same word, translated usually as “God” that, in the very first verse of the Bible, is the creator of heaven and earth. It is this same word, used one verse earlier, when God describes himself. “I am YHVH your Elohim.” There are gods and there are antigods. There are positive things we put up to distract us from God and there are negative ones as well. We can worship an idol – a false god – or we can claim to disprove God and so not worship any gods… but anything that distracts us from truth is an idol. It takes the place of God: it is a false one.

Monsignor Robert Hugh Benson wrote a wonderful piece of fiction called None other Gods. It is perhaps my favourite work of religions fiction, actually. I don’t mean that it’s better than fictions by CS Lewis (which are allegories) or Tolkien (which have religious philosophy behind them). I mean it’s religious fiction. There is a story to tell and religion is part of it. It’s not allegorized, it’s solid. The main character – Frank – becomes Roman Catholic, is disowned by his family, deserted and betrayed by his friends, expelled from school… and dies praying a rosary after being beat up by the pimp of a prostitute he’s just liberated.

It takes place at a time in the early 20th Century when it was perfectly legal to be Roman Catholic in the UK. But it was not something nice people did. Benson did it as well and so did his hero, (now Blessed) John Henry Cardinal Newman. But Frank did it in the book and it instantly cost him everything he had. He was homeless by page 7.

Frank spends the most part of the book wandering from town to town as a Tramp, as it was called, although he also spends time in Prison for a crime committed by someone else, and he forgives everyone. And he does, as noted, free a woman from her pimp, returning her to her family,  only to get killed for it. Frank did all of this rather than go back on the promises he made to a Roman Catholic Priest one afternoon, having discovered that there was a Real, Absolute, and Irrefutable Truth. His name is Jesus and his Body is the Unam Sanctam, Catholicam, et Apostolicam Ecclesiam.

And Frank would have no other gods from that point on.

Christ is a stumbling block to both Jews and Gentiles. The former because they ignored all the signs and the latter because how can a political criminal from a 3rd world country be the creator and ruler of all things? Admittedly, most of the modern world doesn’t care about the signs and they ask, essentially, the same question: how can a dead guy from 2000 years ago in a poverty-ridden corner of imperial repression mean anything to us today?

If you find the answer, you may be like Frank. Jesus will enter your heart with cords and drive out every one of those other gods as with a whip. There will be no corner where you can hide and continue your worship of Ba’al or Diana, of Trump or Bernie, of Abortion or Condoms, of Money or Drugs, of any other god. And – I speak from solid, repeated experience here – when you try to sneak them back in the glaring light of reality is so bright that you look at them and say, “What was I thinking?”

In the propers for the office of Vespers for pastors (read on the feast of certain bishops like Basil the Great or Francis de Sales) there is a line from  the intercessions that makes me gasp every time I hear it.