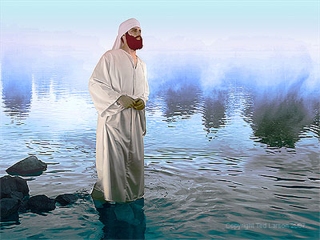 The Readings for Tuesday in the 4th Week of Lent (B2)

Certe vidisti, fili hominis?
Have you seen this, Son of Man?
הֲרָאִ֣יתָ בֶן־אָדָ֑ם
Son of Man in the Latin and English. In Hebrew it’s Son of Adam, like in Narnia. Yes, Adam means “man” and also “earth creature”, or even “earthling”. But both of those are the meanings of the Name of the First Man. Calling Jesus “Son of Man” is calling him the Son of Adam. That is an important tag here!
In the movie, Contact, Jodie Foster plays a scientist who (she thinks) has been contacted by aliens. All the clues come encoded in, as it were, micro-dot forms: a cold-war era spy trick where a secret message was photographed and compressed, over and over, until it was just a full stop at the end of a sentence. But the right microscope and a knowing eye could discern what was really there. So also Jodie Foster digs into every clue to discover the depth and content, eventually building a huge machine which people imagine will teleport her, somehow, to a distant galaxy. Instead, her travel pod falls to earth in moments. But in those moments, Foster meets with the aliens who – as with all their clues – found a way to compress so much data into the meeting: that one second in space stretched into an eternity as they passed info through her to the other Earthlings.
It’s an amazing plot device that the author, Carl Sagan, stole from CS Lewis and every story about Faerie abductions out there. No matter how long you are in Narnia, no time seems to have passed in this world at all. The Doctor says, “People assume that time is a strict progression of cause to effect, but actually — from a non-linear, non-subjective viewpoint — it’s more like a big ball of wibbly-wobbly… timey-wimey… stuff.”
Dreams seem to function this way as well: they say that a dream, in real time, only lasts for a second, a brief moment. But in that moment time changes for the dreamer. You’re on a roller coaster having tea with Elizabeth the First and Donald Duck and then the coaster goes over a waterfall and you’re in Shanghai before the War wondering why the Giants never played baseball here (it’s so lovely in the Spring) but then you remember that the Giants have not yet moved to San Francisco. And you wake up.
A couple of seconds, they say, is all that took, but in Dream Time it stretched out into eternity and all made sense.
So I wonder if it was that was the Prophets. I say that because the Angel’s Comment, “Have you seen this, Son of Adam?” reads like a trigger phrase that will suddenly call the whole vision back to mind.
And what a vision it was! A trickle from the door of the temple of Jerusalem grows as it leads away from the temple until it fills the whole world. If that trickle of water represents the faith and teachings of Israel, imagine the odd arrogance of it being just a story the writer made up. There is a tribe of enslaved persons, captured and living in Babylon (about 600 years before Messiah comes). A priest of that tribe who has, himself, no temple or sacrifice and no country of his own, envisions his faith spreading through all the world; imagines that his faith is intended to flow away from the temple and that it will deepen and expand as it does so, until all the world is filled with its Truth!
God was setting things up and we will see this river again, in the book of the Apocalypse.
The Jews, in their Exile, spread throughout the world paving the way for the Apostles who bring the news of Messiah. They pre-evangelize every corner of Babylon, then of Persia, of Alexander’s kingdom, of the Successor Kingdoms, and of the Roman Empire. Everywhere they go the Apostles preach to Jews and Gentiles, at first in synagogues planted around the known world by this Diaspora. There are Jews even in Roman Britain. And then there were Christians. (The first Roman Jew from Britain on trial for an “Alien Superstition” was in 57 AD.)
The river grows and deepens. Have you seen this Son of Adam? In an instant it can be clear. Do not forget this, and, if you do, you only need to remember, Have you seen this Son of Adam?