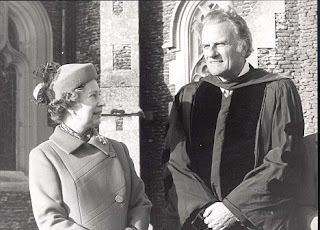 The Readings for Friday in the 4th Week of Lent (B2)

Factus est nobis in traductionem cogitationum nostrarum. Gravis est nobis etiam ad videndum, quoniam dissimilis est aliis vita illius, et immutatae sunt viae ejus.
He is become a censurer of our thoughts. He is grievous unto us, even to behold: for his life is not like other men’s, and his ways are very different.

I keep wondering if the Righteous Man really is like this or if the Others actually feel this way about him. I do not legitimately know. I know how the elders of Israel felt about Our Lord, even though he’d done little more than make discomfiting claims. Stephen annoyed them as well. The issue seemed to be that both Jesus and those who came after him riled up the people. But no one gets riled anymore. As a late Archbishop of Canterbury once said, “When St Paul preached they had riots. When I preach, they have tea.”

When Billy Graham passed away I heard only a very few people get cranky: most who remembered him at all just fondly remembered America’s pastor (or the Queen’s favourite preacher). Many of the cranky seemed to confuse him with his son who does more politics than his father ever did.

Yet I know that from the White House to Hollywood neither our political leaders nor our cultural ones are any more moral than Nero’s Rome. St Paul would have lots to say to us, but nothing new. The author of the Book of Wisdom was writing about pagans around Israel, but also about sinners inside Israel. So there’s nothing new to say there, either.
Did meeting St John Paul or St Teresa of Calcutta have any effect on either the Reagans or the Clintons? I doubt it. When (ECUSA) Presiding Bishop Ed Browning called President GHW Bush before the war on Iraq, President Bush said “Talk to Barbara, she’s the religious one” and slammed the phone down. That’s about the gruffest thing I’ve ever heard from a politician  to a religious leader, but it’s an outlier as far as data points go. For most political leaders (including the current crop, around the world) it’s a scoop of ice cream to be seen with a religious leader: an afternoon of platitudinous mummery leading nowhere.
Did the righteous ever make the unrighteous feel as described in this passage? Were the righteous ever ever righteous enough to annoy by their mere presence? Knowing that they killed Jesus, I guess it is to be expected if anyone should get that far along in the path but, apart from all the priest and nuns killed by Reagan-supported troops in Latin America in the 80s, there seems to be no attempt to undo the righteous. (To be clear, I’m not including myself at all. I doubt I could discomfit anyone.)
But, I wonder: what the heck are the righteous doing wrong?
3