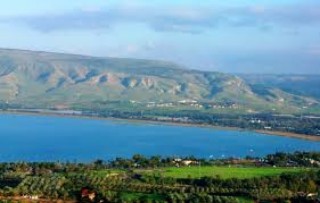 The Readings for Saturday in the 4th Week of Lent (B2)

An Anglican clergyman once told me that whenever he heard a Southern Drawl he immediately assumed he was talking to someone unlearned. I tend to feel the same way about anyone who has a “Lon Guyland” accent, to be honest, or someone with an “oh, now, dere ya go” upper midwest twang. I can’t fault him for it, but I can decry it in myself. We are all parochialists – and we stay that way now, perhaps even more so in our divided country, sussing out where someone is from while trying not to racially or culturally profile them. But still, doing so. We like folks to be like us.

The term “Galilean” stayed pejorative until the 4th Century AD. For all I know it is, once again, a Hebrew way of saying “hick” or “redneck”. They may really despise the Samaritans, but those twangy, redneck sailors are a fish basket of deplorables.

In point of fact, this is classism. We make assumptions about learning and earning, potential and actualized, based on simple cultural clues. It is as insidious as racism, but because it is a secret tool of all of us, it is rarely decried.

We see the same regional classism at several points in the Gospels: it starts with can any good thing come from Nazareth? and continues up to today’s readings (and will go beyond). Folks in the Gospel – even good folks – are worried about what will happen when we let in those others and they start to run things their way.

This continues in the Body of Christ to this day: be it the odd liturgical warring between the Slavs and the Greeks in the east or the Irish and the Italians in the west, or the liturgical music wars: Eagle’s Wings vrs Palestrina. (I’m only just now making peace with the idea that the Boomers should be able to die in peace and take their vernacular, emo music with them untrammeled.) But even within these camps, do we sing a Godspell Mass or a U2Charist? Do we do Haydn or Missa Luba? If you’ve never heard the latter, Congolese masterwork, please, give a listen at the end of this post!

As humorous as all this is, it’s filled with two sets of assumptions:
1) They are different and wrong.
2) We’re doing things right.

When these are over even liturgical adiaphora like music, ultimately these are merely matters of humor and I might want to write out a story for the Reader’s Digest. When these are over the person, however, these are anything but funny. If I make assumptions about you based on cultural clues I’m reading, I’m detracting from the image of God in you. If I’m making racist assumptions, that something many of my friends understand and can call me out on. But if I’m making classist assumptions,most all of my friends are in the same class. We all do make the same assumptions. It is much harder to navigate around that – because we all have the same blinders.

Earlier this week I said a couple of things: if this is true of Christ it is true of you; and also, where are you sent? These gifts that you have that no one else has? The same Giver of all Good Things has given all these gift. To despise any one is belittle the image of God. To react to anyone – especially an enemy – with anything other than an active veneration of that image, that icon of the divine in them – be it a coworker, a stranger on the street, a homeless person, a clerk in the store, whatever – is to fail in love and to again crucify the Archetype of that icon.