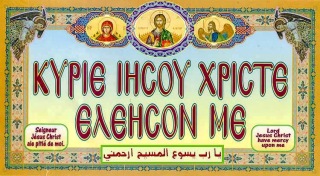 The Readings for Wednesday in Easter Week (B2)

Argentum et aurum non est mihi : quod autem habeo, hoc tibi do .
Silver and gold I have none; but what I have, I give thee.

In a funny book from 1987 called Life: A Warning, by Stephanie Brush, a lacklustre sequel to her 1985 comedic tour de force, Men: An Owner’s Manual, the author pointed out that everyone knows airplanes can’t fly. In the back of every winged tube there is a meditation room filled with monks chanting. These invisible do-gooders are the ones who keep the planes in the air.  The pilots are all insane folks on Xanax made to believe they are flying the machines to keep the humble monks out of the spotlight. This is a humorous retelling of the Jewish story that there is a secret Minyan of Righteous Men whose prayers keep the world together.  Prayer, that is, when it is doing what it should be doing. (I’m not sure now: this could have been in the chapter on why not to fly in Life: A Warning or else in the chapter on why not to date a Pilot in Men: An Owner’s Manual. ¯_(ツ)_/¯ Finding either book in the 50￠ bin at Goodwill would be a fun find.)

The online world is awash in prayer requests and promises of prayer. I belong to a men’s group online and we fast and pray each Friday for intentions brought up in the group, yet not a day goes by when at least one of my brothers doesn’t have a request: a job hunt, a family crisis, a relative who has fallen asleep in the Lord, or one who is about to. Facebook is like that, as well: friends and friends of friends asking for prayers or forwarding requests for prayer.

What are we to do? We could live life daily just scrolling through Facebook. I know some folks do that anyway without prayer ever coming up.  Still, taking the requests as well intentioned, what are we to do?

There is one more thing even more common than online requests for prayer: that’s the actual need for prayer. Scroll through Facebook or your local newspaper, a national rag like US Today or just read the streams of news coming off of Google Plus, the New York Times, SF Gate, wherever.  The actual need for intercessory prayer is huge. We are surrounded by a culture devoid of the realization that it needs all of our prayers at every moment.

I’ve seen how many folks will walk up to a priest (or monk) in religious garb and just ask for prayer. The power of the robes it is (because I’m was no more a righteous monk than I am a righteous tech worker). People will stop you in WalMart or at a stop light. People need prayer, but that’s not what I’m talking about.

Peter and John walk into the Temple. Stop me if you heard this one… and they meet a beggar asking for alms. Instead they pray him to wholeness. Yes, they work a miracle, but that’s the same thing: just a shorter time to resolution. What is it like to pray for the world unasked and unmarked? Again, I’m not talking about being asked to pray: but what did you do when you heard about (pick a shooting crisis) in the news feeds on that day? Did you stop and intercede for the shooter, the victims, the police, the families, and those at home watching terrified? I didn’t. I usually start getting angry at how fast the political commentaries show up – which makes me no different from the political commentators, or the protesters, all with each our own self-righteous anger.

What did you do when the war broke out in fill in the blank under President fill in the blank? Was your first thought In the Name of Jesus of Nazareth… or was it to take sides for or against the war?

In the story from the Gospel, the walkers to Emmaus, St Luke and his buddy, St Cleopus, meet Jesus and don’t recognize him. They talk to Jesus about all that’s happened recently in Jerusalem. It’s especially funny when the boys are like ‘You have to be the only person in Jerusalem who doesn’t know these things that have happened recently.” And Jesus is all, Quae? What things? Jesus doesn’t need to hear the news, of course because he is the news. Rather he wants to illustrate the story with his wisdom. He has to open their eyes to the real meanings of everything in the scriptures.

We need that same gift of wisdom to understand the real meaning of gun violence, sweeping the homeless off our streets, and the Spotify IPO. All of these have meanings and all of these need prayer.

What I have I give thee…

It is the responsibility of the Church to be the Body of Christ in the world, to be the divine master acting. Each of us have a duty, a religious obligation to pray through the world daily. To walk around praying the rosary, to offer a Hail Mary or a Jesus Prayer for everyone that crosses our virtual, real, or newsreel paths, to elevate a meeting at work with a silent Pater Noster or Gloria Patri. The homeless, begging on the street, should be prayed for at all times. But so should the woman fighting with her partner on the Subway, the person driving the broken shopping cart in  front of you at Ingles, Fortino’s, Key Foods, Publix, or King Super. Can you pray your way through the Newspaper, or the next election cycle, not worrying about who’s on whose side, but rather learning that all are God’s people, all need redemption and all need your prayers?

What would it be like to end the day with so many prayers said?