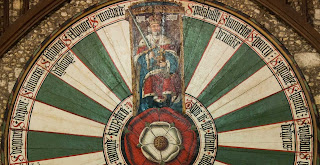 The Readings for Wednesday in the Week of Pentecost (B2)

Si Dominus voluerit. Et : Si vixerimus, faciemus hoc, aut illud.
If the Lord will, and if we shall live, we will do this or that.

I watched the Pope Francis movie last Saturday. One of the things it did was provide a huge amount of context for some of the Liberal Press’ favourite Francis quotes. The one that got me in the solar plexus was a rather loaded question about “the gay lobby” in the Church. It was presented on the airplane in rather oleaginous manner by an obsequious woman who felt she had to ask “permission to ask a question about a very delicate matter…” and then asked His Holiness how he was going to “confront the gay lobby in the church”. In the days of my political activism, having heard many such questions, I would have said “hater”. In this case, I won’t say that because being close to power makes us all very odd – as does being a journalist. Every journalist wants the Power to Say Something and to get kudos from their fellows for getting a good quote.

When confronted by such a disingenuous question the Pope let fly. The question, which, for all that it was well-oiled and fully pumped up with big words, really should be translated as, “Will you tell gay people to get out of the church?” The reply – now well known – was sound bitten as “who am I to judge?” Yet in full context the reply was a reminder to the journalist, to everyone on the flight, and to the rest of us, that God calls us all to holiness. There were quotes from the catechism, and a good bit of puffing from the Holy Father. It doesn’t matter where you start the walk, or how long it takes to get there, it’s where you end that’s important. And the Pope was asking in reply that if someone who identifies as Gay is sincerely seeking the Lord, who is he (or any of us) to judge? There are a lot of folks in the Church – gay and straight – who are not seeking the Lord at all. We have more to worry about. Yes, who am I to judge, but also, who are you to judge?

Within the last couple of days Pope Francis has said something that has been reported as “God makes some people gay.”  I’ve been asked what I thought about it and, since I don’t believe in ontological differences based on sexual desire, I think it’s a fair question for me. And, coincidentally, here comes today’s reading from St James:

Behold, now you that say: Today or tomorrow we will go into such a city, and there we will spend a year, and will traffic, and make our gain. Whereas you know not what shall be on the morrow. For what is your life? It is a vapour which appeareth for a little while, and afterwards shall vanish away. For that you should say: If the Lord will, and if we shall live, we will do this or that.

This passage reminds me that we don’t get to pick the events in our lives. We only get to pick the way we react to them. There is a line used by the Orthodox to discuss both the Fall of Constantinople to the Turks and also the Bolshevik Revolution in Russia: these God allowed to happen to the Church “because of our sins”.  Oddly this same line is never used to discuss the sack of Constantinople by the Latins which can be traced exactly to a political power play inside the Byzantine world that resulted in a bunch of Angry Latins. Does God allow political falls or not? Am I who I am because God made me this way? Does such formation happen at such an early age that it’s not possible to answer such a question?

It God wills and we live, we shall…

We are not trapped into our choices: but we are not in control of events. Does God make your parents get divorced? Or does God allow it to happen? Is some part of the “what makes me gay” having been raised by a single mother? Or having been abandoned by her? The divine pattern is not what makes us: it is the matrix in which we are made by our choices and our dance.

In the larger context of Catholic teaching the Pope has said nothing new. God made me. God loves me. Because I have been raised by Christian parents in a Christian context this is not news to me. Even though my family and my churches growing up had some messed up ways of showing that love, they inculcated that knowledge in me. The older I get, the more I realize that my identity, my sense of self, my actions must all be in response to that primordial knowledge. God made me. God loves me. While I have some seriously rough places of selfishness, of dysfunction, of brokenness, of scars from my past – caused by others and by my own bad choices – I have a daily choice: do I act from those places, or do I act from the knowledge that God made me and God loves me?

I can freely decide to make any corner of my being the very center and prime directive of my life. Or if God wills and we shall live,  I can act from that knowledge that God made me and God loves me.

I’m with the Pope on this one.