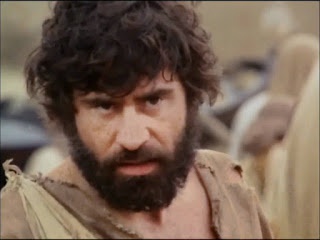 Et coepit ei Petrus dicere : Ecce nos dimisimus omnia, et secuti sumus te.
Behold, we have left all things, and have followed thee.
When it comes to giving up all things, the Apostles actually did, right? To follow Jesus, for them, was a physical choice as well as a spiritual one. They gave up homes and families, they gave up jobs and community standing, they gave up their chances to go back – especially after their Rabbi was named as apostate by the Elders and tortured and slain by the Roman state. And, to follow was to move around a lot to sleep in odd places, to walk for hundreds of miles – in addition to changing their minds about politics, morals, religion, and a whole host of other things. Follow was, perhaps, too weak a word for us to read. It really means “changed worlds for you,” right? How can we compare that to what it costs us, in America, to follow Jesus today – when even the most casual observer expects nothing out of a “Christian” than to vote Republican and bemoan all the sex and abortions people are having?
What do we give up these days, in America? There are places where it is hard to be a Christian and keep your job, yes, but most of us are so neutral in our affect that our presence is rarely noted.
Think of the Great Reformers who challenged the world around them as well as the Church to return Jesus to the center of the stage: St Anthony and St John Chrysostom, St Benedict and St Gregory the Great. Think of Saints Francis of Assisi and St Dominic, think of St Catherine of Siena, or St Maria of Paris, think of millions of martyrs under the Communists in the Soviet Union and world wide, or of the martyrs slain by the Nazis, or American-backed right wing dictators in Mexico and Central America. They challenge the political status quo, yes, but also the Church herself, as she becomes too complacent with her place power and connections in the world. Yet there were millions (even in the Church) who wished those folks would just keep quiet.
Pope Francis is making uncomfortable some who put “America” before “Catholic” in their world, forgetting the fullness of Catholic teaching. Pope Benedict did the same, angering those who put “PC” before Catholic in their thinking. Pope Francis’ major “failing” seems to be his soundbites are more quotable by the left than the right. But the bites, themselves, are rather meaningless platitudes without the teaching of the Church heard behind them. His talk of the poor, of the environment, of charity, of the wealthy, of peace is all within the bounds of the Gospel: just that he sounds less “American” and more “Foreign”. We’re used to being the center of attention (especially the wealthy). Francis won’t grant us that stage.
In his First Epistle (written a few years after his cry about giving up everything) the leader of the Apostles says to the Church,

Therefore gird up your minds, be sober, set your hope fully upon the grace that is coming to you at the revelation of Jesus Christ. As obedient children, do not be conformed to the passions of your former ignorance, but as he who called you is holy, be holy yourselves in all your conduct; since it is written, You shall be holy, for I am holy.

We have to gird up our minds: to face facts. We’re not to be thinking of worldly things any more. Politics, wealth, position, influence, or even connection with those things. This is why St Dominic had his preachers take an oath of poverty: because the unbelievers he wanted to reach didn’t respect anyone who lived in wealthy status and dared to try to tell them what to do. The Gospel must be communicated in humility: not from the Papal Palace, but from a quiet shack in the poorest Favela. The rich must humble themselves to hear it (as we read yesterday). The poor are the only ones pre-qualified. The powerful must humble themselves, the marginalized are already set up.
Now: don’t get me wrong. There are some who are poor and marginalized that want to take the Gospel as a sort of political banner, allowing them to steal and cheat and become wealthy and powerful. But no… the rewards of this world are, themselves, corrupt. And they absolutely corrupt us if we seek them for themselves they are like Sauron’s ring, and we find we can’t use evil for good.
But if we seek to use the goods of this world (which God made, yes) in the manner God intended, then we are all made a little more poor that all may be justly shared together. We cannot use people and love things, but rather we love people and use things to make all things better for all. I must seek the goods of this world exactly to give them to those who don’t have them, to the poor. God puts success and wealth in my hand only so that I can build a more just world around me in my acts of personal piety and in my political choices.
However: this premise puts us at odds with the world. The landlords who want to shut out the poor, the wealthy who don’t want the poor on their streets, the powerful who want to “seal the border” and yet traffic in slaves for personal and corporate profit will all begin to see us as their enemies in our very mode of life. Those who seek to hoard all the things into their little estates where they can enjoy hedonism without consequence and even pretend to be Christians at the same time will see us as their accusers in our very mode of life. Those who seek Justice and Equality without reference to Divine Revelation will by default build inequity and injustice into their projects. They too will see us as their enemies for in the end we are working towards different goals.
In the end, a Christian can have no enemy and so cannot call any one human in the world “my enemy”. We cannot not love – equally – anyone God puts in our path. There is no political construct in the world today that does not have named enemies. So, in the end, no Christian can follow any political construct of this world to its logical conclusions.  At best, we can only be resident aliens in any political system or party, in any philosophy or action constructed outside of the Church.
In the end, we have to give up everything to follow Jesus.