I was in New York City for the Ordination of my friend, Linda, to the Diaconate of the Episcopal Church, to be held at the Cathedral of St John the Divine, the Largest Gothic Cathedral in the world. This was the Summer of 1985: I had taken a year off of NYU and moved to Atlanta, made a few errors, came back to New York. Then I spent a semester at the Institute of Theology, the ECUSAn Diocese of New York’s “Late Vocation” project.

That semester I had my first clue that I wasn’t fitting in with the general ECUSAn slant on things: my sense (even at age 25) of what was Christian was not quite en vogue. Still, I struggled bravely forward, holding to my “big tent Anglo-Catholicism” that had room for gay couples and ordained women while still insisting on the literal reality of the Virgin Birth, the Physical Resurrection, and the Adorable Presence of Christ in the Eucharist.

After Linda’s ordination I had a wake-up call. One of her friends arrived at the party late (pretty much everyone had gone and it was down to a few professors and geek talk). He had that afternoon been fired as pastor from his parish – an Anglo Catholic bastion on Long Island – because he, a celibate, had been asked if he was attracted to men or women. In honesty he said the former, and that was a bit much for the folks at St Fortescue on the North Fork. There was suddenly much anguish and chatter at the party and the guest left with others to plot a future. For fear of the same future, I broke down in the silence, and suddenly Linda was holding me as I cried for the all the crazy stuff in my heart, and all the ways I was sure God was calling me, and all that ways that doors could suddenly close.

Linda and her daughter departed on a vacation and I was left alone, minding their apartment on Chelsea Square: feeding the cat and spending my summer vacation on the property donated to the Episcopal Church by the author of A Visit from St Nicholas. I went out that night and got drunk, to be honest, drowning my sorrows and low self esteem in several local watering holes. I let myself back on to campus by the postern gate on 21st St and crashed out hot and wet in the dank night of a New York City summer.

Waking up too late the next morning I totally needed a shower. I woke dressed and hung over, but drowned sorrows only sink to the bottom, they are still there when the swamp is drained. I removed my clothes and stepped into the shower. At that moment, the Angelus rang from the Chapel, and I decided to go to Mass. I put on fresh clothes and went down to the square and went left into the Chapel.

Sitting in a stall, I was approached by the sacristan and asked if I would take the first lesson. I demurred because I was unshowered and not a seminarian, but I was told this was OK. At the appointed time I stepped up to the Bible and read the lesson from Isaiah appointed in the 1979 Book for the Feast of St Barnabas.

Thus says God, the LORD… who created the earth… who gives breath to the people upon it and spirit to those who walk in it: “I am the LORD, I have called you in righteousness, I have taken you by the hand and kept you;… Behold, the former things have come to pass, and new things I now declare; before they spring forth I tell you of them.”

35 years later the Feast of St Barnabas came round again (on Monday) and I was remembering this event. I have a history of misreading moments like this. If that random, coincidental call to a Bible reading wasn’t God telling me I was called, what was it? Why do I feel like such a huge failure after 25 years in Customer Service?

Today I’m reading that pivotal moment differently. All of life with its chances and changes is right there: “… I have taken you by the hand and kept you…” The clearest actions of God in that 1985 weekend was Linda holding me while I cried; me holding on to Linda’s apartment and cat while she was gone; even the invite to come away from my small town in upstate New York and spend a week for free in New York City. All of that was the action of God, taking one by the hand.

This is what I’m learning from St Catherine of Siena: God gives us love and all we can do is give it away. God calls us each (even folks who can’t or won’t listen) to be loved by him. He is infinity itself, an infinity of Love. Our finite lives can never repay that love nor return it. So our love, our repayment of His love, must be lavished on those we find around us while expecting nothing in return save only more love from God himself; to send out even further. What if all our cravings for understanding and validation, all our desires for awards and participation trophies are but bad coverups for this one transubstantiational loop? God loves us and lavishes us with grace. He changes us into models of himself that we can likewise lavish others, aiding them in their theosis, by the love we pass on. The only place love can go is out and through.Yes we love God, but he has told us clearly that the only way to love Him is to love our neighbors. All our Godward worship is really God’s us-ward charging of our batteries. When we are fully charged up, we are to turn and serve our neighbors. This action to others is the only love that reaches to God.

This is how customer service becomes a spiritual path, and Rick told me so two decades later, preaching from the howdah at St Gregory of Nyssa parish. What a customer needs and wants is not up to you to dictate. Service is all that is possible. Yes, there are rules beyond which we cannot go (support boundaries, as they are called in the trade). No customer will get beyond those – no matter how many times they ask to talk to a manager – the Customer is not always right. In the same way we cannot, in God’s love, help our neighbor to sin, either.

Service is an act of Love. Rather, it can be as also professional hospitality can be an act of Love. Both of these can also be a painful, automatic business transaction. They are ideally a fully-human, generous action of Grace; just as a doctor can be cold, calculating, greedy, or caring, and either way still cure your lumbago. As God is holding us, we can hold others. We might not be able to make the pain stop (that’s what people often want Customer Service Agents to do) but we can feel the pain with you, and move through the pain with human interaction. This can be stopped by unloving on either side of the conversation. God can take you by the hand, and put people in your path daily whom you are obligated to love, but you can make that obligation as joyful, or as much of a failure, as you wish.

And as true as it is of Customer Service, it is true of any other-facing job: yes, there are places where love is about as welcome as corporate espionage. I suggest Christians have no more place there than they do in the production of Adult Films. But for the other 90 percent of the darkening world, we can be light.

Bishop Barron, wrapping up the Q&A after his talk at the Googleplex, was asked, “How do you see our role as Catholic employees at Google?” The Bishop answered, (paraphrased because I can’t take dictation) First, that you be a person of Love, wherever you find yourself. In any situation find the opportunity to love. Love is not a sentiment, it is to will the good of the other. Wherever you are, find the path of love and walk it. And, secondly, if someone is curious about you Catholicism, be ready with an answer. Love first, and be ready to give a reason for the hope that’s in you.

This is the path of service, the Little Way of St Therese, the action of God holding is you holding someone, as Mary holds the God-Child who holds the cosmos. 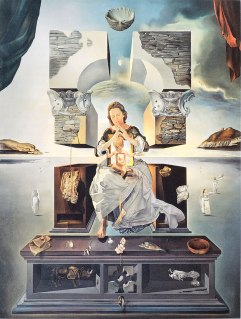