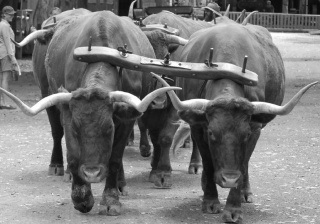 The call of Elisha is this strange thing, is it not? Elijah (who had been told a few verses earlier of this plan) simply walks up and tosses his poncho over a man ploughing with oxen and walks away. The man follows. It’s a subtle sign. It works. But there’s one more test: Elijah says “Go back. What have I done to you?” But Elisha knows and follows. Elijah is yoking Elisha with the call of God. This is the meaning of the action.

This comes after the previous scene where there’s an Earthquake! and Fire! and a Wind Storm! and then a faint whispering sound. It’s that last one that will make your hairs stand up: it was God. Drop a scarf on the guy… this you say is a call?

How subtle are God’s actions in our lives!

The difference between the destruction of the Prophets of Ba’al and the call of the Prophet Elisha is astounding. God may decide to act, once in a while, in showy miracles. I tend to want showboat events: lightening flashes, or visions in dreams, handwriting on the wall, or audible conversations with Ghostly Presences, but God gives us a nudge, a whisper, a silent and persistent intention; a sense of something more. Those other things can often be distractions. I probably would have wanted to run out after the Earthquake or the Fire. I would have responded to the Big Show. God’s got better things planned, though.

God wants better things for us, as well: don’t swear, says Jesus, just say yes or no. A big show of words can be useful or it can be distracting, but it doesn’t mean more. In fact, given the traditional spiritual counsel to silence, yes or no can be a lot of talking indeed.

A reminder from yesterday: it is the relationship that matters. Getting out, being social, joining in prayer with the community, fellowship with our sisters and brothers, and being the servant to each other. We strain ourselves to do big things, when all we need to do is love. We want to be the flash mob doing  a Mozart Mass in the mall when all we need is someone to lead the carol sing at the seniors’ home.

When God drops a mantle on you, are you tossing it off in a fit of fan dancing and showmanship, or do you say, let me kiss my folks goodbye? I love that Elisha kills his yoke of kine and feeds the neighbors. When God calls you away, he doesn’t absolve you of your relationships. He improves them.