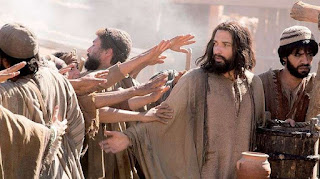 Et omnes male habentes curavit :
And all that were sick he healed

And all that were sick, he healed… that “all” there is the Greek word, πάντας pantas, meaning all. It drives some folks bonkers. They can rant their way through that. They want to argue for what is called double predestination: that God has doomed some men to Hell already. So when the Bible says Jesus died for “all” obviously he didn’t die for all meaning, you know, all. He died for a handful of people like, you know, us. I’ve seen a marked argument from some that “all” only means some… As if God wants to not set the world aright so much as to keep it from lurching so sharply to one side. So, clearly, Jesus heals only ever other one, or maybe one out of every 3 that comes to the door.

Or he heals all.

There are just a handful of healings recounted in the Gospels. We have two in our reading today, but the important part of this story is what happened that night when all that came by were healed (where all means all).  We can imagine that Jesus spent the better part of 3 years ignoring everyone, with the occasional “zap” to keep up the headlines. Or maybe God went around doing what God does: fixing things that we had broken.

The Fathers say that Jesus weeping at the grave of Lazarus was not weeping in the human sense, mourning for the loss of someone (because Jesus already knew he would raise him up) but rather the tears of God weeping over what human sin had done to the world and how well death reigned.

It seems possible that there were many such heart-rending moments for the God-Man, seeing the depths to which people whom he loved dearly were driven. Imagine the pain of God at seeing his own mother’s grief at the death of her husband; or seeing her grief over his own passion and death. And I can imagine the young Jesus sweeping though a crowd and healing everyone just because everything must be set right. And when he goes out in the morning to pray and regather his energies, it is because he is literally exhausted. Remember he once slept in a boat in the middle of storm.

This is the humility of God, coming at us as one of us and yet being God. Pouring out his all and his everything for us even when it means the total loss of strength, the total exhaustion of his flesh, the running ragged of this mortal coil. This is God saving us with every fiber of his being. Every ounce of his strength.

Yet we like to hold a little bit back. Instead of coming at God with all that we have, we need to keep this one place (or maybe two places) in our lives “in control” right? For me it’s usually things around sex but for others it may be work or money. It comes up anytime one says, “Yea, I’m Orthodox, but…”  or  “My family is Catholic, but…” What ever comes after “but” is a place we’re holding off from God. It’s one place we’re not giving our all. It’s the ballot box, or the doctor’s office. It’s our relationship with our in-laws or our boss. It’s, “Let me cheat on my taxes, it may be immoral, but I’ll give more money to the Church.”  It’s like a Mafia Don willfully committing the same sins over and over again because he knows confession is easy. Or Politician saying she can get more votes by supporting a few non-Catholic things… and be in power to do overall Good, right?

The problem with our logic is that holding back doesn’t save us. We need to imitate the God who gave up everything – and continues to give it all up.

All here, means all.