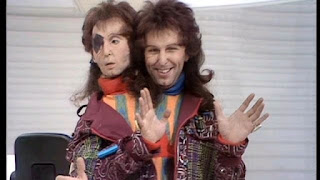 Zaphod Beeblebrox, the former president of the galaxy, was once condemned to a form of torture so cruel that no species was known to survive it. The Total Perspective Vortex showed the condemned being their true place in the universe by showing the entire universe and they, themselves in it. As this was the universe created by Douglas Adams in his Hitchhiker trilogy, there was a humorous point, of course: but it was driven home. We’re nothing.

Dr Sagan tried to make this same point in a different way, using an image of earth taken from beyond the reaches of our solar system and sent back. It’s more complex than Zaphod’s experience, but the message is much the same… 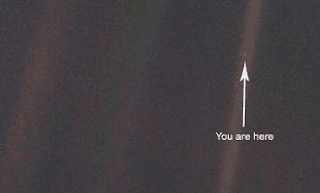 Look again at that dot. That’s here. That’s home. That’s us. On it everyone you love, everyone you know, everyone you ever heard of, every human being who ever was, lived out their lives. The aggregate of our joy and suffering, thousands of confident religions, ideologies, and economic doctrines, every hunter and forager, every hero and coward, every creator and destroyer of civilization, every king and peasant, every young couple in love, every mother and father, hopeful child, inventor and explorer, every teacher of morals, every corrupt politician, every “superstar,” every “supreme leader,” every saint and sinner in the history of our species lived there-on a mote of dust suspended in a sunbeam.
The Earth is a very small stage in a vast cosmic arena. Think of the endless cruelties visited by the inhabitants of one corner of this pixel on the scarcely distinguishable inhabitants of some other corner, how frequent their misunderstandings, how eager they are to kill one another, how fervent their hatreds. Think of the rivers of blood spilled by all those generals and emperors so that, in glory and triumph, they could become the momentary masters of a fraction of a dot.
Our posturings, our imagined self-importance, the delusion that we have some privileged position in the Universe, are challenged by this point of pale light. Our planet is a lonely speck in the great enveloping cosmic dark. In our obscurity, in all this vastness, there is no hint that help will come from elsewhere to save us from ourselves.
― Carl Sagan, Pale Blue Dot: A Vision of the Human Future in Space

Through an odd literary conceit, Beeblebrox was not destroyed in the torture. I think Adams was on to something far more Christian that the self-described Atheist would ever know.

These verses today from Hosea are part of the blessing recited daily by pious Jewish men as they wrap their arm with the Tefillin. Specifically the bit about betrothal is added as the finger on the left hand is wrapped three times, as if it were a wedding ring.

The Tefillin are a sign of the wedding between God and Israel, the covenant struck at Sinai. This marriage, in turn, is a prefiguring of the restored union between God and all mankind, lost in paradise but restored in the last days.

God has bound us to himself in love by becoming one of us, by entering into this world as it’s creator, living and dying in it as its subject, and rising from the tomb as the conqueror of death and the Lord of all.

Wrestling thus with this passage I began to wonder at two things: the gender bending in that it is only men who wear Tefillin according to tradition, and yet it is men who speak as being betrothed (as bride) to God. And, in what way might this be personalized? Could one speak of himself as personally the Bride, in the Church or in the New Israel? Certainly the Tefillin are done individually, a sign, a connection, a sacramental, if you will, of the covenant itself between God and his people. But can that be seen as “one’s personal relationship”?

As Zaphod is exposed to infinity he discovers that he is, in fact, the center of the universe. It takes a while (in the books) to figure out why, but when I first read that it made perfect sense, at least in a mathematical sense. What is the center of infinity? Some, today, would want to say infinity means we are nothing. This is a sort of tyranny of gigantic numbers. The large wins, the small is lost. But in God’s economy, it is the proud that is lost. The humble wins. And, as Dr Sagan noted, these infinities leave us humble.

In God’s creation, as close to infinity as we can imagine, and God himself, who is an infinity of Love, what is the center of infinity? The math is clear: the center is you. The identifiable center of the infinite ocean of Love flowing from the Eternal, Radiant Is… is you. In a circle whose circumference is infinite, the center is everywhere. Far from being destroyed by the perspective of infinity, we are blessed to realize that it is one, in the first person, who is betrothed to the Eternal One, blessed be he. And it is that love, the source and ground of all being, that makes my own being, all other being possible.

If you were the only person left, God would die for you. In love. Infinity is in your hands and your heart. And you are betrothed in Love.