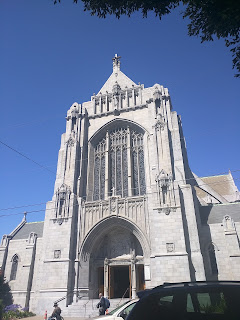 Messis quidem multa, operarii autem pauci. Rogate ergo Dominum messis, ut mittat operarios in messem suam.The harvest is abundant but the laborers are few; so ask the master of the harvest to send out laborers for his harvest.

In my “work” as a Google Guide, answering questions about businesses on Google Maps, I’m asked the same sort of questions over and over about local shops, restaurants, bars, and events. One of my favourite questions is “Is this place easy to spot from a vehicle in normal traffic?” Since I walk a lot, I don’t usually think of that, and in this day of GPS and “catch a Lyft right to the street address” it’s not something that bothers me.  But I do think about it for gMaps.  In fact, on SF streets where the speed limit is 25 mph but most folks do 45 unless you know where you’re going, you’re going to end up somewhere else. It’s not an issue in my current house of worship (see the photo above). I usually tell the Lyft driver, “turn left and you’ll see the front door…” I would make a comment about “most” Catholic churches, but the 70s kinda ruined it. A bishop once said of my former Catholic parish (in Georgia), “Is this a Church or a Pizza Hut?”

I was asked on Sunday why I had become Russian Orthodox (the subtle difference between the OCA and ROCOR is a bit hard to convey) and I told the story of how, even though I lived within walking distance of an Antiochian Parish, they had no sign outside with a service schedule, they had no Yellow Pages ad (this was in the early 00s), they had no voicemail (churches used to put their service schedule on their voicemail), and they had no website. Father Victor, memory eternal, the dean of the OCA cathedral, had not only a website, but one that was often updated by either himself or by his eldest son who is now the dean of the Cathedral. Fr Victor was committed to evangelism as was his assistant, Fr David – and as is the new Dean, Fr Kyrill.  A neighbor of the Antiochian parish tells me they still don’t have service times posted. SInce he had never seen what we call the Orthoburka, he thought maybe they were Muslims.


Since a lot of us are on the road somewhere, having visible churches is important. But walk-in or drive-by traffic is not the best source for new folks. Getting most folks into church still requires an invite.

When I was younger, I would hear our Lord in today’s passage talking about “laborers” and think “ordained ministry”. That’s not a very Catholic idea at all. In fact, there are places the non-ordained can go and things we can do that are too difficult for clergy and, sometimes, even for the non-ordained members of religious orders. Sure: a friar looks cool, but he sure does stand out in a crowd!

A former boss, an Episcopal Priest, once shared this with me: Every member of the People of God (Greek, “Laos” which means “people” gives us the English “Laity” More on that in a minute)… every member of the People of God is called to be an Evangelist, an ambassador for the Kingdom of God. All of us Evangelists are called to the Eucharistic Table for strength, solace, and empowerment by God’s Spirit. Some of us, however, don’t do quite so good as Evangelists, so we give them other duties. We make them waiters around the table. Some don’t do so good, even so. We still have a function for them. We make them each a maître d’ and give them a staff of waiters.

Now, the Eucharistic community of Evangelists (with our waiters and maître d’s) is often in trouble. So we’ll take a maître d’ every once in a while, maybe one that’s past his prime, and we’ll let him serve in a new function. We’ll dress him up in fancy robes and a big hat, and put him out in front of the community to draw fire, as sort of a decoy. This way, the whole community, of Evangelists, waiters, maître d’s and decoys can do the work of spreading God’s Kingdom, each in their own role and function.

It’s not quite what you might think of the ordained ministry, but it makes a point I’ve heard over and over in the Catholic Church: it’s our job, as the Laity, to do this work. The ordained ministry is there to support us in this work and call ups to deeper holiness (which is the internalized version of this work). We turn the whole structure on its head when we forget that the point of our hierarchy is service: the higher up you go, the more folks you have to serve. The Pope is called “The servant of the servants of God”.

So when we pray for more laborers, we don’t mean more clergy (although we need more Priests in America, at least). What we mean is more folks in the Laos. I heard an Evangelical – whom I rather like – say that there should be no division between the “laity” and the “clergy” (fair). He then said “Laity” comes from the Greek word for “nobodies”.  In fact, quite the reverse: in the Greek Old Testament which Jesus would have used, “Laos” is used for Am Israel, the people of God, but not for the Gentiles (the Goyim). The People is an “us” term. It’s not a nobody, it’s a member of and worker for the Kingdom.

That’s us, the Evangelizing people of God.

Can someone see your Parish from the road in normal traffic? If not, why are you not standing in the traffic directing folks into your spacious parking lot? You are the best local guide going. But you gotta work it.
_____