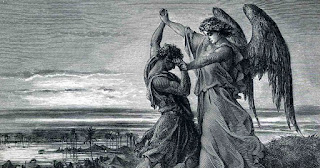 Popule meus, quid feci tibi? aut quid molestus fui tibi? Responde mihi. Quia eduxi te de terra Aegypti, et de domo servientium liberavi te, et misi ante faciem tuam Moysen, et Aaron, et Mariam.
O my people, what have I done to you? In what have I wearied you? Answer me! For I brought you up from the land of Egypt, and redeemed you from the house of bondage; and I sent before you Moses, Aaron, and Miriam.
These words are the refrain for the hymn, sung on Good Friday, called the Improperia or the Solemn Reproaches. The text is written as if spoken by God from the cross. For example:

I led you out of Egypt, from slavery to freedom, but you led your Saviour to the cross.

I led you from slavery to freedom and drowned your captors in the red sea, but you handed me over to your high priests.

This is one of those hinge moments, however. We can’t have it both ways.

These sung lines are often cited as a case of antisemitism. That can only be true if you A) understand the teachings of the church; and B) assume we reject them whole cloth. For the teaching of the Church is that Israel is the chosen people of God and that in Christ, we Gentiles are grafted into that relationship. We become Israel not instead of but rather also. These verses and others which seem to criticize “the Jews” but, in fact, are read by Jews as a complex mea culpa for other things not dealing with Messiah, cannot then be read as only speaking of any perfidy of the Jewish people at the time of Christ, but must refer to the entire people of God and how we all constantly betray him. Yes, for we, too, have been led from slavery to freedom, yet we lead Jesus daily to the cross by our actions and our words.

God asks, today in Micah, that the mountains and hills listen to his argument against Israel (that is, us…) and he has one, surely. The common point in all these instances and in the Gospel where Jesus is talking to “an evil and unfaithful generation” (us) is that “Israel” means to wrestle with God. Yes, God would like us to do justice, and to love kindness, and to walk humbly with your God. But we are much more likely to struggle like Jacob did the night before God made him lame and changed his name to “he who fights with God.” That’s our expected function. Not that we ever win, really: but God wants us to submit even though he knows we won’t, because it’s hard. The wrestling always ends the same way it did for Jacob. God puts Jacob’s hip out of joint and blesses him.

There is but this required of us: do Justice, love Mercy, and walk humbly with God. For most functions today, Justice means “revenge”, mercy is unknown, and humility before God (or anyone) is brushed aside. Sunday’s post noted that Catholicism is hard. At Confession yesterday before Mass the priest’s comments surprised me and to be honest I spent much of Mass whining to Jesus about it. So, at least I was praying sorta… but as I was kneeling before communion I imagined this conversation: My Lord, this is too hard. What am I to do? And Jesus responded, “My child, it know it’s hard, but you are, still, alive.” The wrestling match ended that way.

All of that was demanding a sign. We want things to be different, yes, but we want them to be different in the way we want them to be rather than in God’s way.  We want Justice where “our side” wins. Mercy shown only when we feel like it. The only sign we’re going to be given – the Sign of Jonas – has been given to us already. The men of Nineveh are waiting for us to respond to God without grumbling. The Queen of the South wonders that we cannot hear wisdom when it is offered.

When will we stop struggling?