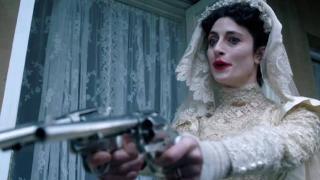 Liberati sumus, eo quod fecerimus omnes abominationes istas.
“We are safe; we can commit all these abominations again”

The Hebrew word used in this line for “Abomination” is תּוֹעֵבָה to’evah, a specific class of ritual and societal uncleaness in the Jewish law, related to certain acts of impiety such as idolatry, and eating unclean foods, certain sexual acts, and the sacrifice of children. In short, a description of nearly every popular Catholic politican and not a few popular clergy in the news. It’s not pretty. And yet on a given Sunday in San Francisco, you can see one such politician receiving the Blessed Sacrament unmolested in her parish church. And yet… crisscrossing the country and visiting Hollywood, Washington, DC, or Boston, one can see the same thing in Orthodox churches. If only my former ecclesial home were seen to be as important as Rome by the media, more would be said about suicides in seminary, Bishops touching things they should not touch, monastics arrested and sent to prison, and sex parties with Metropolitans. And goodness only knows what goes on in Eastern Europe, Turkey, and the lands around Palestine. Everyone says, “We’re safe. We can do these abominations again.”
To’evah, abomination, is also used of charging interest on a loan. In current English usage, usury usually something like loan sharks, payday loans, or medical billing practices. But in the Bible charging any interest at all is morally equal to rape and idolatry. For this reason, until recently, Christians were forbidden to be bankers at all. By the Church. It was a curious dual Antisemitism that forbade Christians to do so, but allowed the industry to continue in the hands of Jews, but then the Church changed her mind when the historic banking families became wealthy enough to interest Christians in the business. Still, given the housing situation in many parts of the country, the lack of care for the poor, the lack of food, the lack of medical care… Even outside of sex acts and worshiping the Golden Calves of the president, we’re all safe, right? We can do these abominations again.
In the end both lungs are spotty if not out and out cancerous. The bride is abominable. The sex part draws attention, but listen to the left criticize the Church’s teachings on sex or listen to the right criticize the Church’s social teachings. It’s all the same a la cart Catholicism, it matters not if you like the Surf and Turf or the Vegan side of the buffet.
What’s to be done?
The Gospel speaks to us now.

The Kingdom of heaven may be likened to a man who sowed good seed in his field. While everyone was asleep his enemy came and sowed weeds all through the wheat, and then went off. When the crop grew and bore fruit, the weeds appeared as well.

Is that not a perfect description of the Church, taken side by side with today’s prophetic passage? There is one fault though: our weeds (Tares in the Greek – a specific kind of weed that looks exactly like the wheat but happens to be poisonous) are not condemned to be always weeds. In the Church of God, I can be a tare today and good wheat tomorrow. God’s grace can get to me after a lifetime of taredom and restore me to righteous wheatiness in no time. But you have to admit, we have some weeds in the amber waves.

The slaves of the householder came to him and said, ‘Master, did you not sow good seed in your field? Where have the weeds come from?’ He answered, ‘An enemy has done this.’ His slaves said to him, ‘Do you want us to go and pull them up?’

There are not enough Holy Hot Pockets in Hades for all the folks I would put there. And certainly an enemy has done this. Let’s get’em!

‘No, if you pull up the weeds you might uproot the wheat along with them. Let them grow together until harvest;

And remember what I said: we’re not plants. I’m a mess today, but I may be all filled with grace later. We can stand or fall by our depending on God’s grace or our failure to do so. Jesus doesn’t want us to go on Church purity drives that kick out the sinners. They’re the whole reason the Church is here. The tares need coaxing into wheatiness. We’re all transitional forms forms of saints.
The bride has to stay a mess: and yes, there are those who will find themselves in purgatory here and now. It may be God’s way of making them into wheat. And I don’t understand it, but then, I’m not God and I don’t have to understand it.
By the same token, none of us can be more merciful than God, but collusion with sin is neither mercy nor love. I know how I would want to reach out with the pruning hooks and so I’m thankful that’s not my job. I condemn myself thereby. Even now, in light of recent scandals, some of my friends who did not believe “gay” was an ontological category are calling for all “the gays” to be kept out of/leave the priesthood, tossing out their own sense of the Church’s teachings in their anger.

For those of us not called to serve as judges in the Church – and that’s probably all of us reading this blog, at least, we are called to pray for “the Tares” and also for those harmed by them. We are called to try – at least – to love them all back to God. There are those who have spiritual authority to take other action, and that may happen. But even then, our job is to pray and work for healing. Acting through righteous anger will not cause the world to say, “See how these Christians love each other.” But rather it will make us just like the world. We can be a part of Rage Culture too.

Yet never worry. God knows his own.

At harvest time I will say to the harvesters, “First collect the weeds and tie them in bundles for burning; but gather the wheat into my barn.”

It is most important to keep this in mind. As the whole thing seems to go to hell in a hand-basket, over and over again, our job is to pray and live faithful lives. To be virtuous even when the shepherds fail, to be trusting in the one who, in the end, will gather us into his barn.

Though the cause of evil prosper, yet the truth alone is strong;
Though her portion be the scaffold, and upon the throne be wrong;
Yet that scaffold sways the future, and behind the dim unknown,
Standeth God within the shadow, keeping watch above His own.

In the end, the Bride is beautiful. It is she whom God came and sought, it is she for whom he died. Her beauty, unseen even now, has ravished all of heaven and wooed her creator to come. But it was a beauty he gave her… and he knew it was there, even when she fell so low. He knew he could raise her up with himself.

___
Please consider supporting my my writing via my Patreon.