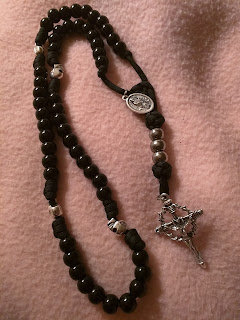 Watching the Song of Bernadette or the Miracle of Our Lady of Fatima I was often moved by crowds reciting the Rosary. Their whispered earnestness and the passion was carried through the screen: the prayer of the church through the ages. Holy Mary, Mother of God… I know these mid-20th Century religious melodramas are poor by today’s standards. But they pull at the heartstrings of one who loves our Lady.

When I became Catholic it was so wonderful to find myself as part of this prayer. Kneeling before God and adding my whisper to the thunder of the ages. So I would find myself overcome with tears kneeling with “the old ladies” on Saturday mornings or with the Novena Folks before the Evening Mass. And sometimes, bending my mind so, I could close my eyes and hear the continued prayers from the past blending with ours. So it has been for the last couple of years. I have also encountered quiet Rosaries said at 6AM and I’ve been awed by the joyful Rosaries of newlyweds praying in quite corners of the church in the evening.

A new thing happened recently, when the guys sat on old sofas pulled up in a circle near a grill in the parish parking lot. We began by polling intentions: my wife and my children; people we love or will come to love; the idea that finding one’s vocation was learning to love the folks God have each of us to love; for each other and our struggles for purity; for work; for courage.  Then we began the Apostles’ Creed and the rest of the Rosary. This bass pedaled sonorous rumble was a new prayer experience for me. The focused intensity of men joined in Christ to ask God for help, asking God’s Mother – our Mother as well – for her prayers was entirely different than the whispered experience I knew.

At the Rosary’s close, we sang the the Salve Regina. The surprise was in the singing of this hymn that normally wraps up the prayers. Suddenly all our voices united in singing the Latin text to the traditional plainchant setting. Where before there were bass pedals, now there was baritone warmth and glory. This prayer of brothers in arms, united in Spiritual Warfare, was the most exhilarating meditation! Far from navel gazing, as one might (wrongly) imagine a meditation to be, this was more like a shared pep-talk before the second half kickoff.

It seems these two Rosaries are important: both the whispered rumble and the rolling thunder. The Church survives on the former, but she needs the latter as well. I don’t know what it might feel like to others gathered in groups, but I know that, as far as some visionaries go, men report experiencing the Rosary as a weapon, a sword. St Dominic has his friars imitate knights by wearing the Rosary hanging on their left hand side not in place of but rather as a sword. I felt that for the first time the other night.