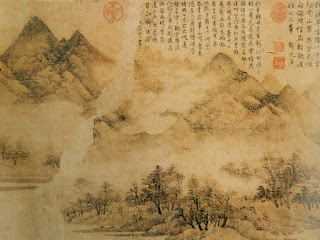 Et qui utuntur hoc mundo, tamquam non utantur : praeterit enim figura hujus mundi.
And they that use this world, as if they used it not: for the fashion of this world passeth away.

The Greek in these verses is interesting and a lot of English translators (and St Jerome, as well) build it in parallels:

Those married as not married
Those weeping as not weeping
Etc

The same verb is used in the positive and negative form. It’s nearly like Lao Tzu’s “Do Not-Doing”. Cry not-Crying, Rejoice not-Rejoicing. Own not-Owning… So they get to Verse 31 and keep the parallel going: use not-using. Except that’s not in the Greek. Unlike the earlier verbs the writer doesn’t just say something and not-something but rather χρώμενοι xromenoi and καταχρώμενοι kataxromenoi where kata adds the meanings to over-use, to use fully, to use up. The Greek says “Use the Kosmos without using-up the Kosmos” or even use without abusing the Kosmos.

There is a difference between using the good things of this world and abusing them, between blessing God for a good vintage of wine and getting blotto. There are intended uses (the telos) of God’s blessings and then there is abuse of them. CS Lewis covers this in Perelandra. There are fruit so good, so refreshing that one is filling, but a second – when it’s not meal time, nor otherwise needed – would be sinful, an act of gluttony. Food is like that on earth. Sex is like that: for God gave it to us for a purpose and we’ve discovered myriad ways to over use or abuse it. Earlier in Chapter 6, Paul gave us a list of people who kataxromenoi everything to the point of becoming their overuse for Paul uses the verbs as nouns. He adds, “They will not inherit the kingdom of God”.

That’s what it means to kataxromenoi: to use up something so much as to become identified with the using of the thing.

It is to be noted that “Kosmos” does not mean “the planet, the orbiting stars” etc. It can mean that, sure, but it means “the system”, or, literally, the arrangement. The ordered harmony of the stars but also the system of Empire, the way the world is governed. We’re not to do that: think of people who say “American then Catholic”, or who break it down even further and say “Kennedy Catholic” or some other political styling; anyone who hyphenates. When we let the worldly system define our faith, we’ve drifted into καταχρώμενοι and away from the faith that is described as “Catholic” that is, whole.

The Catholic faith is her own Kosmos, or rather she is the breaking-in of a new Kosmos on this one. The form of this Kosmos is passing away… as the new one, the Kingdom of God, breaks in. We can use even the political system of this world as long as we don’t become hacks in it. We can enjoy the food as long as we don’t become gluttons, we can have sex adhering to the divine plan. We are to be the advanced, covert (yet somewhat overt) force of an invading army.  We are the spies with Joshua in the Promised Land. We are, as Lewis notes, in occupied territory. We can’t be going native.