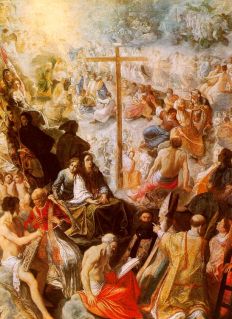 A Blessed Feast of the Exaltation of the Holy Cross!

The office hymn today (in the tradition office, pre-V2, and as we used it at my monastery) tells a great mystery, repeated again in Holy Week: singing the whole plan of Salvation. It begins with Matins, in the dark with notes of prehistory and Christmas.

Sing, my tongue, the glorious battle,
Sing the ending of the fray ;
Now above the Cross, the trophy,
Sound the loud triumphant lay :
Tell how Christ, the world’s Redeemer,
As a Victim won the day.
God in pity saw man fallen,
Shamed and sunk in misery,
When he fell on death, by tasting
Fruit of the forbidden tree :
Then another Tree was chosen
Which the world from death should free.
Thus the scheme of our salvation
Was of old in order laid ;
That the manifold deceiver’s
Art, by art might be outweighed ;
And the lure the foe put forward
Into means of healing made.
Therefore, when the appointed fulness
Of the holy time was come,
He was sent, who maketh all things,
Forth from God’s eternal home :
Thus he came to earth, incarnate,
Offspring of a maiden’s womb.
Weeps the Infant in the manger
That in Bethlehem’s stable stands ;
And his limbs the Virgin Mother
Doth compose in swaddling bands,
Meetly thus in linen folding
Of her God the feet and hands.
To the Trinity be glory
Everlasting, as is meet :
Equal to the Father, equal
To the Son, and Paraclete :
Trinal Unity, whose praises
All created things repeat.  Amen.
But then, the office of Matins continues with glorious psalmody and antiphonal chanting. There’s a wonderful reading in this office, appended to this post. Then not until Lauds is the hymn completed. In the final verses, sung to the same tune now that the sun is risen, the last part of the story is told, how this babe…
Thirty years among us dwelling,
His appointed time fulfilled,
Born for this, he meets his Passion,
For that this he freely willed :
On the Cross the Lamb is lifted,
Where his life-Blood shall be spilled.
He endured the nails, the spitting,
Vinegar, and spear, and reed :
From that holy Body broken
Blood and Water forth proceed :
Earth, and stars, and sky, and ocean,
By that flood from stain are freed.
Faithful Cross! above all other,
One and only noble Tree;
None in foliage, none in blossom,
None in fruit thy peer may be :
Sweetest wood, and sweetest iron,
Sweetest weight is hung on thee.
Bend thy boughs, O Tree of glory,
Thy relaxing sinews bend :
For awhile the ancient rigour
That thy birth bestowed, suspend :
And the King of heavenly beauty
On thy bosom gently tend.
Thou alone wast counted worthy
This world’s ransom to sustain,
That a shipwrecked race for ever
Might a port of refuge gain :
With the sacred Blood anointed
Of the Lamb for sinners slain.
To the Trinity be glory
Everlasting, as is meet :
Equal to the Father, equal
To the Son, and Paraclete :
Trinal Unity, whose praises
All created things repeat.  Amen.
So all creation joins in the verse and reponse, repeated throughout today’s office:
We adore you, O Christ, and we bless you. For by your Cross you have redeemed all the world.

Chosroës, King of Persia, having, in the last days of the reign of the Emperor Phocas, overrun Egypt and Africa, took Jerusalem, where he slaughtered thousands of Christians and carried off to Persia the Cross of the Lord, which Helen had put upon Mount Calvary.  Heraclius, the successor of Phocas, moved by the thought of the hardships and horrid outrages of war, sought for peace, but Chosroës, drunken with conquest, would not allow of it even upon unfair terms.  Heraclius therefore, being set in this uttermost strait, earnestly sought help from God by constant fasting and prayer, and through his good inspiration gathered an army, joined battle with the enemy, and prevailed against three of Chosroës his chief captains, and three armies.

Chosroës was broken by these defeats, and when in his flight, he was about crossing the Tigris, he proclaimed his son Medarses partner in his kingdom.  Chosroës’ eldest son Siroës took this slight to heart, and formed a plot to murder his father and brother, which plot he brought to effect soon after they had come home.  Then he got the kingdom from Heraclius upon certain terms, whereof the first was that he should give back the Cross of the Lord Christ.  The Cross therefore was received back after that it had been fourteen years in the power of the Persians, and Heraclius came to Jerusalem and bore it with solemn pomp unto the Mount whereunto the Saviour had borne it.

This event was marked by a famous miracle.  Heraclius, who was adorned with gold and jewels, stayed perforce at the gateway which leadeth unto Mount Calvary, and the harder he strove to go forward, the harder he seemed to be held back, whereat both himself and all they that stood by were sore amazed.  Then spake Zacharias, Patriarch of Jerusalem, saying : See,  O Emperor, that it be not that in carrying the Cross attired in the guise of a Conqueror thou shewest too little of the poverty and lowliness of Jesus Christ.  Then Heraclius cast away his princely raiment and took off his shoes from his feet, and in the garb of a countryman easily finished his journey, and set up the Cross once more in the same place upon Calvary whence the Persians had carried it away.  That the Cross had been put by Heraclius in the same place wherein it had first been planted by the Saviour caused the yearly Feast of the Exaltation of the Holy Cross to become the more famous thenceforward.