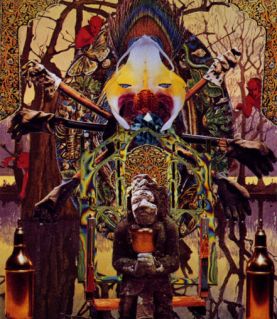 Sed quae immolant gentes, daemoniis immolant, et non Deo. Nolo autem vos socios fieri daemoniorum : non potestis calicem Domini bibere, et calicem daemoniorum; non potestis mensae Domini participes esse, et mensae daemoniorum.
But the things which the heathens sacrifice, they sacrifice to devils, and not to God. And I would not that you should be made partakers with devils. You cannot drink the chalice of the Lord, and the chalice of devils: you cannot be partakers of the table of the Lord, and of the table of devils.

The image above is from the cover of one of my favourite political books, the T.A.Z. or Temporary Autonomous Zone. For a while in the early 90s, I could practically recite the thing. It seemed the perfect image to head up this post.

Paul can be of two minds about the pagan deities in the cultures he visits. On the one hand, there is no such thing as “Hermes” or “Magna Mater”, so the idol is nothing. It’s unimportant. We should pay it no mind at all. On the other hand, the “energies” or “things” that draw humanity to worship idols, that foment fear and superstition in men’s minds: these are demons. So, on the one hand, we know that food offered to idols is – literally – food held up in front of a bit of wood or waved under some metal. Might as well be cooked over wood or in a metal pot for all the “juju” that’s in the idol. But on the other hand there are demons involved in the delusion.

Paul tells us that if you find something in the market, go for it. But if someone tells you that it was sacrificed to idols, then you shouldn’t eat it. The issue is that there’s no “demonic activity” in the meat. But there are demons tempting others – and you – and even accidental visual collusion is still collusion with the demons.

We don’t have a lot of metal or wooden idols in our world any more. So where do we find the demons lurking?

In Ephesians we find Paul telling us we “wrestle not with flesh and blood, but against principalities, against powers, against the rulers of the darkness of this world, against spiritual wickedness in high places.” We’ve made our own idols I think. License and selfish desire, concupiscent ideologies, and false spiritualities all lead us astray. I think it would be easy to make an idol out of some adult entertainment stars, but we’re never that poetic. And demons hate actual art. We’d rather make an idol out of a flag, a football team, or an addiction. For St Paul all the idols of Crete or the Areopagus were also centers of cults: communities of folks. But for us, with our isolation, our internet, our buffering, and introversion, we find that our cultus has room for only one or two.

As with the idols St Paul knew, the thing, itself, is nothing. Drugs, Apple Pie, Chevy Trucks, Hell’s Angels, Cats…  The thing, itself, is nothing. But the energies that draw us and hold us to the thing, the desire to craft identities around it (instead of our God-given identity in Christ) that’s the “powers and principalities” that we’re fighting against. These rulers of darkness draw us into their orbits and force us into isolation, away from each other, away from people who worship differently. Today we’ve even developed drugs so that we can listen more carefully to our preferred voices, shutting out all else. When these demons get their hooks into us it can take decades before healing can begin.

This, then, is the cost of this much more subtle, more more personalized content that’s passing for idolatry today. Against this Jesus stands as a “sign of contradiction”. Jesus is not about “me” but about “us”. Jesus calls us out of our isolation into communion, out of our pallid humanist ideas of “equality” and into constantly kenotic communities. The weaker leads, the stronger serves, the wiser learns at the feet of the fool. God is love: a fiery all-consuming, all-engaging, all-dancing act of self-giving. And we need to be that as well or we’re nothing at all like God. The demons hate this.

The image above, as I noted, is from the cover of one of my favourite political books, the T.A.Z. or Temporary Autonomous Zone. It seemed the perfect image to head up this post as it is clearly of an idol that was constructed by an artist. It’s a sort of thing the occult community used to call “Chaos Magic”. It means nothing to anyone save the artist that made it. But for the rest of us it is beautiful, maybe. Tonight, as I was typing the final lines of this post… I took off my contacts and sat back down to the computer. Only then did I see the demons in the image. I’ve had this image in my possession for nearly 30 years only now, liberated from the book and propped up on my blogpost did I see them.