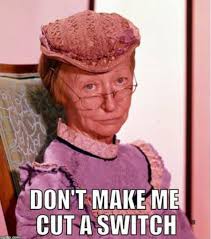 Videte ne contemnatis unum ex his pusillis : dico enim vobis, quia angeli eorum in caelis semper vident faciem Patris mei, qui in caelis est.
See that you despise not one of these little ones: for I say to you, that their angels in heaven always see the face of my Father who is in heaven.
When I was 2, I wondered away from my grandmother’s front porch. I made it all the way to the corner by the Presbyterian Church in Fort Gaines, GA. This was a full block away. I was standing on the corner watching the traffic – I wasn’t on the sidewalk. I was on the curb – when my grandfather, coming home from work yelled at me out of his car window.
I ran all the way back to a switching on the porch. God only know what could have happened to me standing on the corner there. But thank God Grandpa showed up! (I didn’t think so at the time, because no one likes a switch…) 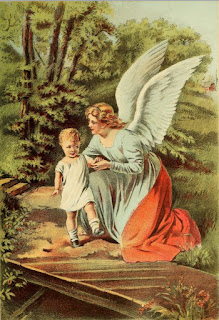 That every individual soul has a guardian angel has never been defined by the Church, and is, consequently, not an article of faith; but it is the “mind of the Church”, as St. Jerome expressed it: “how great the dignity of the soul, since each one has from his birth an angel commissioned to guard it.” (Comm. in Matt., xviii, lib. II). St Basil says, “Beside each believer stands an angel as protector and shepherd leading him to life.” And the Catechism, citing St Basil, adds, “Already here on earth the Christian life shares by faith in the blessed company of angels and men united in God.”
These angels…
I told this story the other day, about getting caught in a blizzard on the freeway and I had forgotten it entirely. Its never come up since it happened (in January, I think, of 2007). I was driving from Hamilton, Ontario, to Richmond, Virginia. I had stopped at a rest area in Maryland to get a nap. It was a lovely night. When I awoke there were about 3 inches of snow on my car… carefully backing out and moving along the freeway, there were about 8 inches within an hour. I was going about 15 miles an hour and there was no one on the highway but me. Ok, I’m stupid. There are no hotels, no gas stations… nothing.
Anyways…
This 18 wheeler comes along side of me… and then pulls in front of me…  then  slows down to match my speed. It was a lot easier driving in one of his tracks, let me tell you. We’re going down a mountain and the truck turns on a blinker. I’m not stupid by this point I do the same thing. I follow the truck off on a ramp. We get to the intersection at the ramp and he signals a right turn. I do the same. He drives into the intersection, and I turn right… and he goes off through the other ramp back on to the freeway. I look, and there’s a hotel.
That’s my impression of how guardian angels work. And no, I’m not saying that the Trucker was actually an Angel. Nor my grandfather. But something made that truckdriver act that way, even though I’m sure that he only used his CB to locate a hotel and led me there. Something brought my grandfather home at exactly the right moment – or maybe kept me safe until he go there.
That’s an Angel acting their part.
Mine stays very busy.
Here’s a performance of Britten’s The Company of Heaven. It’s one of my faves…