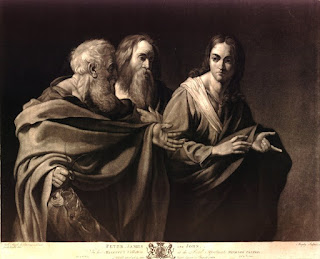 The Readings for the 29th Sunday of Ordinary Time (B2)

Magister, volumus ut quodcumque petierimus, facias nobis.
Master, we desire that whatsoever we shall ask, thou wouldst do it for us.

This came up last night at St Dominic’s. It was a surprise to realize, but the Apostles – in fact James and John, two of the “Big Three” insiders – were making a secular power grab here. Could have been one of the Borgia Popes for this moment. And so they thought that Jesus was going to be a secular king… and these Fishermen and sons of a fisherman, wanted to be on either side of the throne. Just not getting it: God’s kingdom doesn’t work that way. Fr James, the preacher, used it to point out that the Church has been dealing with sinners in leadership roles from the very beginning.

They want their share. You know, Jesus doesn’t yell at them. This is not like when Peter said, “Don’t go to the cross”. They are mistaken – but only in some part of the equation. Jesus is a king. And he will drink a cup. And they, too, will drink it… They will get their share.

They are wrong in the application though.

So… I want to suggest something: that being wrong in the application may not be as bad as taking the cross out entirely. James and John don’t get the same response as Peter.

There are those who think their faith requires them to make political actions and movements. There are those who feel their faith urges them to take out civic power. Jesus has some hope for them that, in fact, they will drink his cup with him.  James, you know, dies a martyr’s death. John lives a long life of martyrdom, caring for Jesus’ mother, going to prison, exile… but he dies an old man praising Jesus.

And when the others hear about it, they get all uppity and in each other’s faces. Jesus has to shut them up with a teaching moment: You know that those who are recognized as rulers over the Gentiles lord it over them, and their great ones make their authority over them felt.

This was also true among the Jews as well in Jesus time: for they had several generations of Maccabees who were a Theocracy – where the king was also the high priest. Then they had client kings who were Jewish at least by birth, but had no sense at all of stewardship or shepherding over the people. The Herods were the most recent of these kings, Jewish in name only and despised by the people.

Christian leadership requires the Cross. This leader is there not as a pusher and mover, not a cowboy with a cattle prod. A Christian leader has to woo, has to call by name, has to give his life for the sheep. Leadership in this role is about sacrifice. It’s about self-emptying. It may be next to impossible to be a Christian Civil Servant, but it’s not forbidden.

In some cases a Crown worn right has made a King a Saint.

But there are those who take the cross out of Christianity. Peter said the cross wouldn’t sell. They don’t mind the politics (as long as they agree) but they don’t want any, you know, sacrifice or conversion. Penance doesn’t play in Peoria. It doesn’t pay well in DC. There are those who ignore the cross even as they use it as a label for their own purposes. They too, don’t want any conversion or sacrifice. They want prosperity and “justice” rather than kenosis. Their politics leads to victory for “us” and an end to “them”. The Cross is for all – or else it is for none. These would not drink the cup of Jesus if they had a choice. It has no meaning, in fact, it may be opposed to all they stand for.