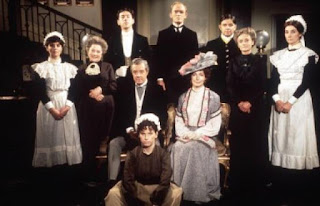 Quoniam per ipsum habemus accessum ambo in uno Spiritu ad Patrem. Ergo jam non estis hospites, et advenae : sed estis cives sanctorum, et domestici Dei.
For by him we have access both in one Spirit to the Father. Now therefore you are no more strangers and foreigners; but you are fellow citizens with the saints, and the domestics of God.
We’re so very used to our modern “classless” society that we tend to think the idea of class is bad. As we play that assumption we forget to note that class is a very real part of our world: it is only the obligations of class that we have done away with. Rich and poor are treated equally before the law as is proper in things criminal, but in things civil there was a notion of noblesse oblige, the idea that one’s higher position required an assumption of charity, of noble largess to those in a lower station. We still have classes of folks in America, we’ve just done away with the idea of an obligation entailed by participation in that structure.

When the Vanderbilt family moved to Asheville, NC, in the 1880s, they built a huge estate… railroad money, you know… but that was not all that they did: they reforested much of several counties that had been greedily logged after the Civil War and left barren. This actually became the seed (root?) for the first national forest, the Pisgah National Forest. They imported experts to decorate the house… whom they hired to teach the locals how to be artisans. They built housing for their growing family and, in the area known as Biltmore Village, they even built a church.

This is noblesse oblige.

In a similar situation today – if someone owned say a Palace or a Casino, or a Tower with their name on it – these folks would all be thought of as “employees” and may not even get them health insurance or a living wage. It’s not just folks who have the trump card in the economic world, either. At one time a single man of my paygrade would have employed a valet and a cook, quite possibly a maid as well. And these would have invested in my success as much as anyone: for my success was theirs as well. Today I do my own laundry and turn out my own lights.

We’d call that a smart business decision. The Vanderbilts would call it greed, sin, and would think it beneath their station to act is such a way.

Why this lecture of the cultural morals of another time?

Because it was the same in St Paul’s time. Because to be a wealthy member of the society in which Paul lived was to have servants and one could judge the quality of the person by they way they treated their servants or those less fortunate who lived around them. This was true in the Roman world just as a matter of culture, but in the Jewish world it was a matter of God’s law. The latter dictated how the wealthy were to leave the corners of the field for strangers to harvest for free, how temple sacrifices were shared with the poor, how an entire society was built around property and yet sharing at the same time.

All this to explain when St Paul uses one Greek word οἰκεῖος ekeios to describe the position of Gentiles and Jews united together. On the one hand it means “members of the same household”, but on the other hand it’s the same word used for what we would call today, The Family, and The Help. Folks upstairs and down are equally part of the same οἰκεῖος.

Paul is using this word on purpose to show that there is no difference between classes of people in the Household of God, for we are all one people. All one household – no matter what our classes are “in the world”. In this household we are all together and all servants. Even our Lord and God washes our feet. So much so should we to each other. Rich and poor, Jew or Greek, in the household of God we are all there, all with our parts to play, all with our obligations to each other fully in place. None of us can claim to be above the other, for we are all in need in someway, all rich in some way, and all called to share in humility in all ways.